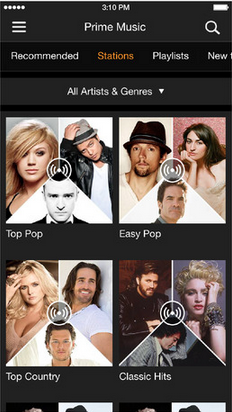 Amazon today updated its Prime Music iOS app to include “Prime Stations,” which gives users a selection of ad-free radio stations based on artists and genres. Users can skip through songs as much as they want without interruption, and Amazon’s personalized recommendations improve based on prior playing history.

Prime Stations was already available on the web, PC, Mac, and Fire tablet apps, but today Amazon launched the service for the first time on iOS. The company also redesigned the iOS app with a cleaner look and more efficient options to find specific songs.

Prime Music, which launched this past June, is available to Amazon Prime members who pay $99 per year for free two-day shipping, access to Prime Instant Video content, and other benefits. While it’s a nice service for Prime members, Amazon’s song catalog still does not stack up to the likes of Pandora, Spotify, or Rdio.

However, with the roll-out of Prime Stations, it appears that Amazon is committed to improving its music streaming player.