The hybrid drone design that Amazon unveiled over the weekend may be only one of several under consideration for delivering packages in 30 minutes or less, but it’s a doozy: The beefed-up Prime Air flier pushes the envelope on technical as well as regulatory grounds.

On the technical side, the prototype shown in Amazon’s video uses an array of rotors (eight, according to The Guardian) to take off vertically, then switches on an additional rotor to buzz through the air horizontally at up to 60 mph. The Guardian says it may be the first vertical-horizontal hybrid air vehicle to weigh in at less than 55 pounds, which is the upper limit for commercial delivery drones.

An autonomous sense-and-avoid navigation system keeps the drone from running into other objects on the way to its destination, at an altitude of up to 400 feet. Researchers at the Massachusetts Institute of Technology showed off a sense-and-avoid system last month, but that one was designed to handle obstacles at a mere 30 mph – half the speed that’s built into Amazon’s specs.

The drone is also apparently designed to home in on a landing pad, perhaps equipped with an RFID tag or transmitter. The idea is that customers would lay out the pad in their backyard or some other open space in preparation for package delivery. (Can you buy a pad like that on Amazon yet? What if it’s raining, or if you’re an apartment dweller?) 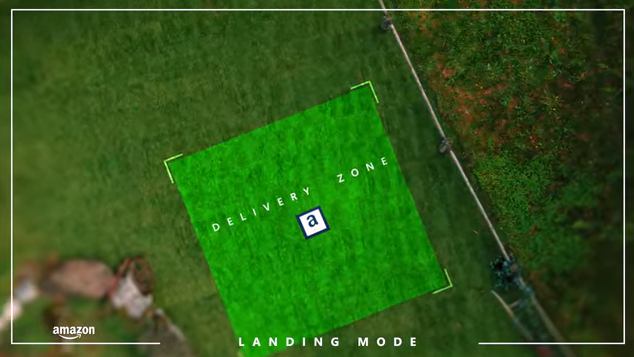 The prototype shown in the video appears to be several feet wide, perhaps as big as a bedstead, based on the size of the shoebox it delivered. You’d probably want to stand clear while a delivery was being made.

Amazon made one thing abundantly clear in the video: This drone is for real, and “not simulated.” Drone prototypes have been tested in rural British Columbia and other locales, including a secret site on private property in rural Snoqualmie, Wash.

“We have more than a dozen prototypes that we’ve developed in our research and development labs,” Amazon said in its FAQ about the new drone design. “The look and characteristics of the vehicles will evolve over time.”

The fact that Amazon had to go to great lengths for its tests hints at the regulatory challenge: The Federal Aviation Administration’s current rules ban delivery drones from flying over someone else’s property without the proper permissions. Drones are also prohibited from flying beyond the sight of their operators. Unless those rules are changed, Amazon Prime Air will never be ready for prime time.

The FAA is currently considering a new set of rules for commercial drone operation, at the same time that it’s hustling up a separate system for registering recreational drones. There’s a chance that the commercial rules could be tweaked, based on a series of Pathfinder tests that are now being conducted to study urban flights, long-distance drone flights and operations beyond the line of sight.

“We are aiming for a final rule next spring, but I can’t address the potential implementation timeline,” FAA spokeswoman Laura Brown told GeekWire in an email. “The proposed rule did not include beyond-line-of-sight or nighttime operations. … We are considering all the comments on the proposed rule right now as we work on the final rule.”

“Amazon’s UAS prototype demonstrates the promise of unmanned aircraft systems,” he said in a statement sent to GeekWire. “It underscores the innovative applications for UAS technology, the importance of keeping UAS integration on track and the need to lay the groundwork now for eventually flying beyond visual line of sight.”

Amazon is making no promises about its timeline, except to say that “we will deploy when we have the regulatory support needed to realize our vision.” Obviously, there’s no word yet about how much Prime Air service could add to the cost of delivery. But the company promises that the service will eventually become a reality.

“It looks like science fiction, but it’s real,” Amazon said in its FAQ. “One day, seeing Prime Air vehicles will be as normal as seeing mail trucks on the road.”