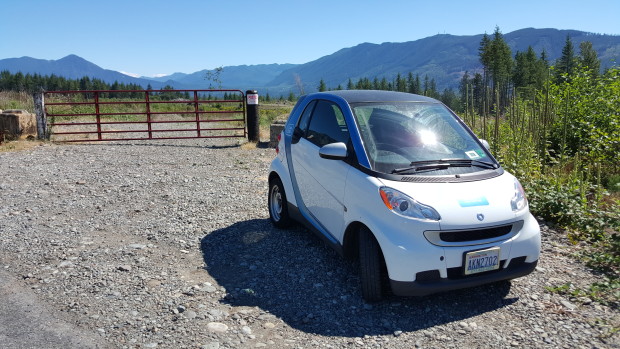 There I was, air conditioner blasting in my Car2Go as I sat in front of a red gate on a gravel road in rural Snoqualmie, Wash. Multiple locals told me this was what I had come looking for: the entrance to Amazon’s secret drone testing site.

I wasn’t lucky enough to show up on a day when Amazon’s prototype delivery drone was being tested. But then I pulled up Google Maps to try to get a sense of where exactly I was.

And that’s when I saw it.

This satellite image, taken on a previous day, shows activity in the area beyond the gate. You can see a couple dark objects on the ground at either end of the image, what looks like a purple tent, a white van and some other vehicles — exactly where people in the area told me they’ve seen Amazon’s team set up. 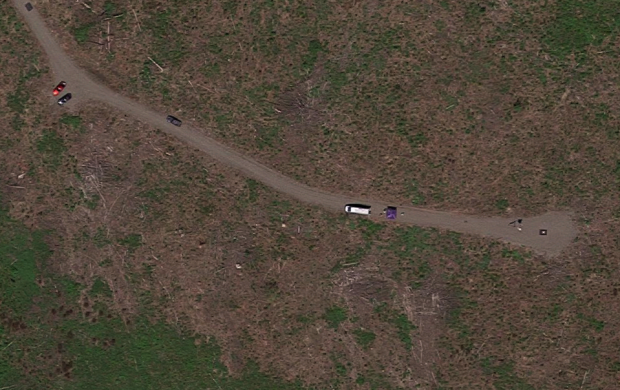 But what is that other object, to the right of the frame in the satellite image above? Later, back at the office, we used the Google Earth desktop software to get a closer look. Here it is from a few different angles. 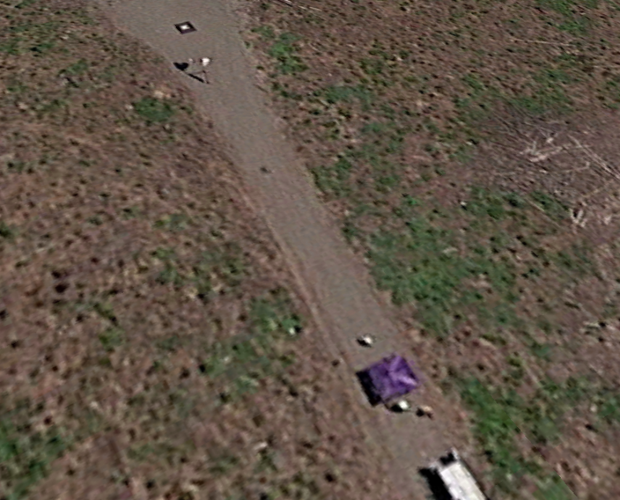 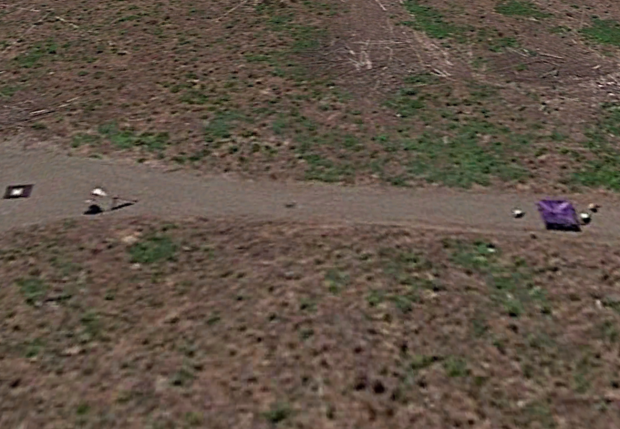 We’re told by locals that Amazon has been using the site only occasionally, so the idea that a satellite would happen to take pictures at the same place and time that Amazon was working on its secret project seems like an outrageous coincidence fit for an X-Files or Twilight Zone script.

Nothing is secret, apparently, in this new world of drones and satellites.

It would also be ironic, given that Google is developing its own delivery drone initiative, under the name Project Wing.

When we asked Amazon if the satellite images show their researchers at work, the company would only offer this statement: “We are conducting outdoor testing of prototype Amazon Prime Air vehicles on private property in King County, Washington. We’re excited about using this technology to one day deliver customer packages in 30 minutes or less.”

The images aren’t clear enough to say with any certainty what was captured, so we’ll let you be the judge.

Publicly, Amazon has shown delivery drones that look like this, with four legs and a mechanism for carrying packages underneath.

However, Amazon has since developed a series of additional, secret prototypes based on its testing. Gur Kimchi, head of Amazon’s drone efforts, told the Guardian in March that the company will take all the testing data and build an unmanned aircraft that’s unlike anything we’ve seen before.

“We are going to end up with unique shapes, unique vehicles. The most important part is to develop strong confidence that our system is safe and that we can demonstrate that to customers,” Kimchi told the Guardian.

The site in the satellite images is on private property in King County, which matches Amazon’s statement. The satellite images are dated June 8 of this year, after Amazon received an FAA exemption to start conducting drone test flights in the U.S.

We have heard film crews have also been in the area, and so it’s possible the satellites caught another group using the same vacant piece of land. Even if it is Amazon’s team, it’s also possible that the mystery object is a piece of measuring equipment, or something else other than a drone.

When GeekWire asked the owner of the property if Amazon was using the land to test drones, he said he couldn’t talk about it.

Amazon is being secretive about the specific locations of its testing sites, and the evolution of its drones, but the company has been clear about its intentions. Amazon pictures a day when drones are as ubiquitous as delivery trucks, buzzing around the sky dropping packages on people’s doorsteps.

The company has struggled to expand its testing here, as the FAA has been notoriously slow in adopting regulations for the burgeoning unmanned aircraft industry. Amazon was initially granted permission to fly one of its drone models in the U.S., but by the time the ruling came around the technology was already obsolete.

Frustrated, the company eventually left and instead began testing about 2,000 feet from the U.S. border in Canada, according to The Guardian. The company also reportedly is conducting tests in the U.K., as well. A Guardian reporter was invited to visit the Canadian test site in March and was told the early tests focused on things like the ability to sense and avoid obstacles, security measures for what the drone does if it loses communication with the base, stability controls and environmental impact.

Amazon applied to test drones outdoors on “private property in a rural area of Washington state,” and was granted that permission in April, according to filings from the Federal Aviation Administration.

How we found it

An anonymous tip and an off-the-cuff comment from an official source is why the GeekWire news team suspected the Snoqualmie area to begin with.

So I grabbed a Car2Go in Seattle and made the 45 minute drive out into the middle of nowhere. It’s the kind of place where “No Trespassing” signs outnumber doorbells and people don’t seem fond of strangers wandering on to their front porches.

Locals were able to fill in the rest of the details, and the mysterious satellite image was the cherry on top.

People I spoke to in the area say Amazon’s crew rolls into town in a white van about twice a month and sets up in a clearing, out of sight behind a ridge. Meanwhile, security guards sit at the end of the road in pickup trucks to shoo away anyone who stumbles across the secret testing location. When they’re done, they pack up everything and are gone without a trace.

One person even called Amazon’s team of drone researchers “the invisible people.”

They say the gravel road is a popular hangout spot for drugs or other activities one does on a stretch of road not frequently visited by police — or anyone else.

Standing there, I couldn’t help but feel like I had stumbled across a plot of land in rural Washington state that will ultimately be a small piece of technology history.

Amazon has gone to great lengths to protect the secrecy of its drone testing program. The company hopes the data it’s collecting will one day change the world, but for now the technology is limited to dirt roads and other nondescript locations around the world.

The site was in a place we never would have expected — but that’s probably what made it such a perfect choice.