Those attending T-Mobile’s “Uncarrier 5.0” event in Seattle next Wednesday will get to enjoy live music from what appears to be John Legere’s favorite musicians.

Seattle’s own Macklemore & Ryan Lewis will be performing at the event, marking the second time in six months that T-Mobile has hosted an event with the duo.

Back in January, the Bellevue-based wireless carrier presented its own Macklemore & Ryan Lewis concert at the Belasco Theater in Los Angeles, three days in advance of the group’s performance on the Grammy Awards at the Staples Center. 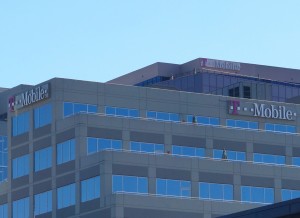 That concert happened a few weeks after Legere, T-Mobile’s outspoken CEO, was booted out of an AT&T-sponsored Macklemore concert at CES in Las Vegas.

T-Mobile’s association with Macklemore has angered the United Students Against Sweatshops, which recently launched Macklemoresucks.com to call out the Seattle rapper for his ties to T-Mobile.

T-Mobile moved its Wednesday event from Los Angeles to Seattle earlier this week, just days after Amazon announced its own plans for a Seattle press event on the same day. Amazon will make its pitch earlier in the day — widely speculated to be smartphone-related — and T-Mobile is holding its event in the evening.

It’s not clear what the T-Mobile will announce, but its invitation says “We don’t play it safe and sound,” and has many speculating that the event might include a deal with a music streaming service — perhaps Amazon’s new Prime Music.

T-Mobile’s previous “Uncarrier” announcements have brought major changes that shook up the wireless industry. Earlier this year, the company announced at CES that it would offer to pay early termination fees for customers interested in switching from their existing wireless carrier. Other Uncarrier announcements include an end to traditional contracts and a plan that would make it possible for users to upgrade their phones early.

T-Mobile is giving away two free tickets to Wednesday’s event — you’ll have to retweet this tweet from Legere to qualify.