Student activists angry with how T-Mobile treats its call center workers are now using Macklemore to spread awareness about their cause.

As first noted by The Verge, United Students Against Sweatshops (USAS) recently launched Macklemoresucks.com to call out the Seattle rapper for his ties to T-Mobile.

The group has previously protested the Bellevue-based wireless carrier for running “electronic sweatshops,” where they say workers face “an enormous amount of stress,” that leads to “abnormally high amounts of anxiety attacks, ulcers, and depression as a result.”

The new website asks Macklemore to stop working with T-Mobile until the company takes some sort of action. The Seattle rapper has partnered with T-Mobile in the past and even played a special concert in Los Angeles four months ago that was sponsored by the company.

“Despite attempts by students to get Macklemore to take a stance against T-Mobile’s electronic sweatshops, he has yet to confront the company he so shamelessly promoted,” reads the website. 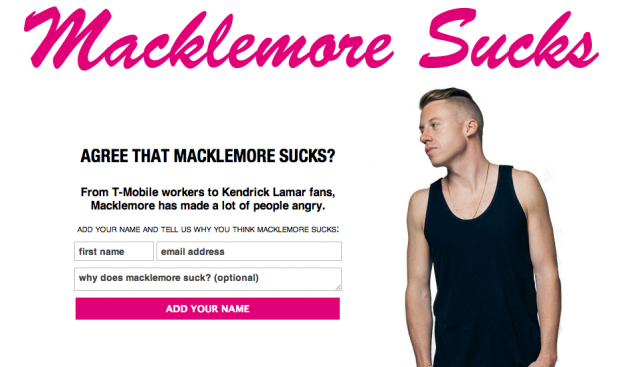 The timing of the new site is noteworthy, particularly since there are a lot of people already angry with Macklemore for a costume he wore during a secret concert in Seattle last week. That’s a good sign for the activist group, who probably won’t mind tapping into that anger against Macklemore to drive home their message about T-Mobile.

#MacklemoreSucks because he thinks it's okay to promote union-busting @TMobile. http://t.co/gZQiydXW2V

The USAS, who sent a letter to Macklemore and Ryan Lewis last month, also calls out T-Mobile CEO John Legere, accusing him of preventing T-Mobile employees from unionizing:

In September 2013, 8 MetroPCS retail store workers tried to organize a union for better working conditions. The aggressively anti-worker CEO John Legere traveled to the store to try and prevent these workers from forming a union. Furthermore, T-Mobile call centers and retail stores continue to have an extremely high turnover rate because of lack of job security, awful working conditions such as being forced to wear dunce caps, and facing so much stress that workers are forced to seek medical attention.

We’ve reached out to T-Mobile for comment and will update when we hear back.

T-Mobile respects the rights of unions to exist and recognizes and respects employees’ rights to organize, or to refrain from organizing. We’re proud to be recognized year after year as a “Best Place to Work” and “Top Employer” by industry experts, and as one of the most ethical companies in the world by the Ethisphere Institute.