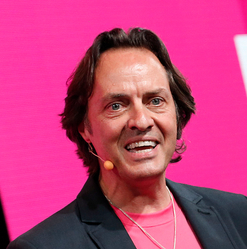 LAS VEGAS — T-Mobile CEO John Legere has been crashing AT&T’s party figuratively for the past year, but he did it for real tonight — showing up uninvited at his rival’s private Macklemore concert at the Rain nightclub at the Palms Las Vegas.

But he wasn’t able to stick around for long.

Roger Cheng of CNet News, who tweeted a picture of himself with the T-Mobile boss (below), said Legere was subsequently escorted out of the party. GeekWire’s Taylor Soper and I are both at the event right now. We didn’t happen to run into Legere, unfortunately, but a security guard confirmed that Legere was told to leave. The security guard said AT&T representatives told nightclub staff that Legere was “harassing” attendees at the party.

No word from Legere on Twitter yet, but you can bet he’s working this into the script for T-Mobile’s big press event here later this week.

Update: Legere tells Re/code, “I just wanted to hear Macklemore.” He also gets in a dig, of course — saying that he could have cut prices for customers with all of the money AT&T spent on the party.

Ran into @JohnLegere at the AT&T party. Yep, he crashed it. And still wearing the pink t-mo shirt. #CES2014 pic.twitter.com/gy9vGTJUEW