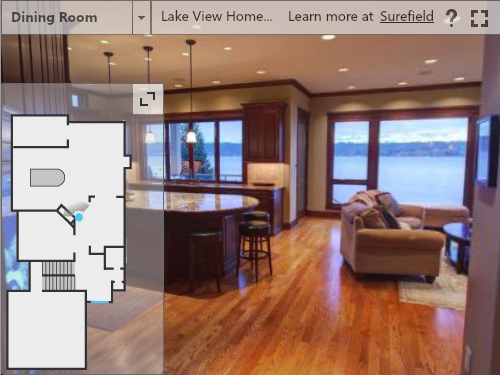 David Eraker is getting back into the real estate business, 12 years after he co-founded Seattle-based Redfin.

Eraker, who left Redfin in 2006 before it emerged on the national scene, has formed a new startup company by the name of Surefield that is looking to transform the way people sell their homes.

On the surface, that may sound strikingly similar to Redfin. However, Eraker — who remains a shareholder in Redfin but does not have any outstanding non-compete agreements — says there are a couple of big differences.

Unlike Redfin, Surefield focuses its brokerage service entirely on home sellers, not on buyers. To do this, the young upstart, which also includes former Redfin director of real estate Rob McGarty and former Nvidia software engineer Aravind Kalaiah, has created a new technology that’s designed to eliminate, or at least reduce, pesky home tours that are now so common in the home buying process.

The concept revolves around the idea of image-based rendering, similar to 3-D imaging services such as Google Street View and Microsoft Photosynth. Surefield uses special camera equipment to capture detailed views of a home — down to the millimeter — creating a virtual tour that Eraker says will be highly disruptive to how homes are marketed.

“Using one of our high-fidelity online models is a much better way to sell your house,” says the 37-year-old entrepreneur. “When a new house gets listed in the MLS, a prospective buyer needs to call a listing agent, call a buyer’s agent, get a home tour scheduled, and then they need to physically get into a car. What we are going to enable … is an entirely new way to facilitate that process without anyone having to drive around at all.”

In that regard, Eraker thinks Surefield will resolve one of the “key last mile problems in residential real estate,” opening up a listed home to more buyers who might now have the means or time to travel to see it. That includes potential buyers in foreign markets or those who may be relocating from another city.

Even for those who live in the same city, Eraker says that Surefield will provide benefits, especially for the home seller who must constantly deal with potential buyers tromping through their home.

“It is way more convenient to have a bunch of people touring your house online than it is in person,” he says. “If you consider what happens when someone typically lists their house, they may have 30 or 40 people that need to come through a home tour. Every time a home tour gets scheduled, you have to leave the house. You have to get the kids out, got to get the dog out, you’ve got to clean up and put away any personal items that you might not want anyone to see or steal. It is a very invasive and basically it is a constant fire drill.”

With Surefield, the idea is to stage the house once, capturing every nook of the property. It takes about a day to stage and photograph the home via Surefield, with the the company’s in-house team capturing up to 25,000 images for the 3-D models. 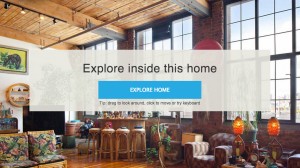 Of course, most home shoppers do not want to buy a house without seeing it in person. Eraker recognizes that fact, and that’s one of the reasons why he decided to establish a full brokerage for home sellers, offering all of the services that a traditional listing agent does.

“Once someone goes through our online home tour, if they still want to physically go into the house, they are going to be way more qualified than somebody who is just looking at 25 photos in the MLS,” he said. “It is possible that someone would buy a house over the Internet without going into it, but I don’t think that’s the main use case.”

The company also chose to create a full brokerage business rather than license the technology to other firms because they wanted to get close to the customer, and learn as much as possible about their needs. It also helped that McGarty previously ran the real estate operations at Redfin, so had plenty of experience in setting up those types of businesses.

Eraker said they would not rule out the possibility of licensing in the future, adding that the technology also has potential applications for rentals, hotels, commercial real estate and vacation properties.

Surefield is opening for business today, targeting home sellers in Seattle. And while no homes have been listed yet, the company set up 8 demo properties to showcase the technology. You can see one of them here:

To make the service work in Seattle, Eraker said that they’d need to get one out of every 1,000 home sellers listing through Surefield. “We’d be extremely happy with that level of market penetration,” he said. About 75,000 homes are sold annually in the 21-county area covered by the Northwest Multiple Listing Service. About one-third of those are in King County.

Even though Redfin also offers a home selling service to customers, Eraker doesn’t view his former company as competition. He notes that Redfin primarily focuses on home buyers. “They are pretty different,” he says.

“We don’t have a search engine. We are not a destination site, and we have no intention to get into that business at all,” he said. “There are a lot of companies that are doing that type of work super well right now.” Eraker declined to comment on a suit filed by two of Redfin’s earliest employees, alleging that the company attempted to wipe out their shares. He said he was not involved in any litigation along those lines with Redfin.

Asked why he wanted to do another real estate startup after an eight year break, Eraker said that he got excited about the computer vision technology they are using to power the virtual home tours. He first gained exposure to that technology while working with Microsoft Research, though none of the technology behind Surefield comes out of that work.

“It is my opinion that computer vision is in the same state as the Internet was back in the early to mid-1990s,” he said. “You have a proliferation of camera sensors all around the planet, and they all generate large quantities of image data. And computer vision is an automated way to make sense of that information…. It really occurred to me that: ‘Wow, this stuff would really cook in residential real estate, given all of the complexity around physically getting people into houses.’ It just made a lot of sense to try to leverage this technology in this area.”

Surefield is self-funded by the founders, but it plans to announce a small seed round in the coming weeks. The company employs less than 10 people in Seattle’s Belltown neighborhood, just a few blocks away from Redfin’s headquarters.