Amazon’s Fire Phone is getting another price cut. 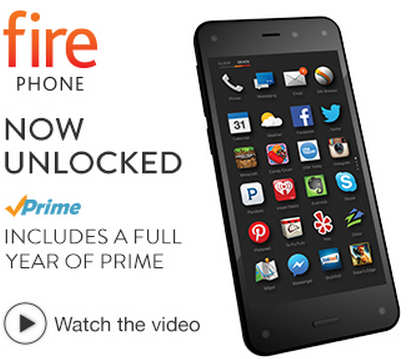 The device, unveiled in July and suffering from lackluster sales in recent months, is being reduced in price to $199 unlocked. That’s down from $649 unlocked when the Fire Phone debuted, and followed a price cut to $449 in September.

Amazon started selling the Fire Phone for 99 cents in September, with a two-year contract on AT&T.

The device, with a 4.7-inch HD display, also comes with a full year of Amazon Prime, a $99 value.

In other words, the Fire Phone — at least so far — is a flop.

We dug into the Fire Phone’s lackluster debut, when GeekWire reporter Tricia Duryee asked whether Amazon could recover from the disastrous launch.

Amazon.com founder Jeff Bezos — known for his long-term thinking — has said that he’ll judge the success of the Fire Phone five years from now.

UPDATE: Amazon says that the $199 deal is only available through Cyber Monday, and that the device comes with new features. The company noted via email:

The unlocked, no contract Fire includes additional features, such as Firefly text translation – the ability to “Firefly” foreign language to have it translated in English, French, German, Italian or Spanish; Firefly wine label recognition powered by Vivino; Best Shot in camera mode that allows you to choose the best image out of three options; secure corporate VPN using native IPSec/L2TP VPN client; plus hundreds of other user interface and performance improvements. These additional features will begin rolling out to existing Fire customers via a free, over the air software update in the coming weeks.