Now that Amazon has admitted its first smartphone was not all it had hoped for, what happens next?

Will Amazon iterate on the Fire phone, and continue sinking time and money into its effort to become a smartphone kingpin? Or, will it cut its losses and pull back?

On Thursday, the Seattle e-commerce giant acknowledged the painful truth: The Fire Phone was a disaster. In the third quarter, the company was forced to write down $170 million in costs associated with Fire Phone inventory. And, it still has plenty of phones sitting in the warehouse collecting dust — $83 million worth.

Amazon has learned the hard lesson that many other companies have already discovered: succeeding in the smartphone business is very hard. 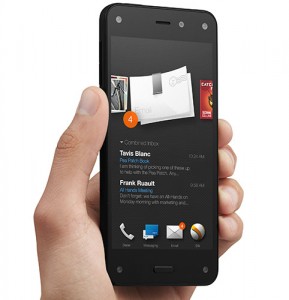 But failing fast is not in Amazon’s DNA. The company’s intrepid founder, Jeff Bezos, believes it takes years, if not decades, to figure out how to make an impact on an established market. In fact, during a recent interview with The Hindu in India, Bezos referred to his long-term vision.

“We’ve been in the hardware business for 10 years. Kindle has become a huge success — we’ve had seven generations of Kindle, four generations of Fire tablets, one generation of Fire TV and Fire phone,” he said. “These things [the Amazon Fire Phone] are super-early. Ask me in five years!”

But arguably, it’s different this time.

The company is investing in so many different verticals. Is the smartphone business key to its long-term success? If resources are limited — and they always are — aren’t same-day delivery, online grocery sales, its international markets, or Web services more worthy investments?

“With anything new that we do — and obviously we’ve done a lot of new things — there’s certainly a wide range of outcomes,” said Amazon’s CFO Tom Szkutak during last week’s conference call with analysts. “We certainly understand that. We try to learn from everything that we do as we launch new opportunities.”

At least one analyst thinks Amazon should give it another shot. “Amazon should not hang it up as they have some interesting features not found on other phones currently,” Bill Ho, an analyst and consultant with 556 Ventures, tells GeekWire.

But another analyst disagrees, saying that scaling back is prudent.

“I think the (Fire) Phone may be one good example where it may not make sense for Amazon to make incremental investments,” said Colin Sebastian, an analyst with Robert W. Baird & Co. in an interview with The Seattle Times.

Amazon has not disclosed its plans on the subject, so anything at this point is conjecture. But in reading the tea leaves, we can tell the company is already becoming less enthusiastic.

It has dialed back spending on marketing (even with the holidays upon us). The Fire Phone TV commercials have not aired for more than a month, with the most memorable TV spot, featuring adorable hipster kids, last seen more than 40 days ago, according to iSpot, a TV advertising tracking platform. TV ads are now focused on Amazon’s new tablet line-up, although print and digital ads have continued for the phone.

There’s also signs that updates to the device are not coming as fast as expected.

For example, when the phone first came out in late July, one of the features that Bezos showed off at the phone’s unveiling failed to launch. It was called auto-scroll, which allowed people to automatically scroll down the page and then tap the screen for “cruise control” to set the speed or pause when reading a book in the Kindle app.

To be fair, the auto-scroll feature did launch on the phone in the United Kingdom, so the software update in the U.S. is more likely delayed for other reasons, such as Amazon wanting to add other features customers have requested. 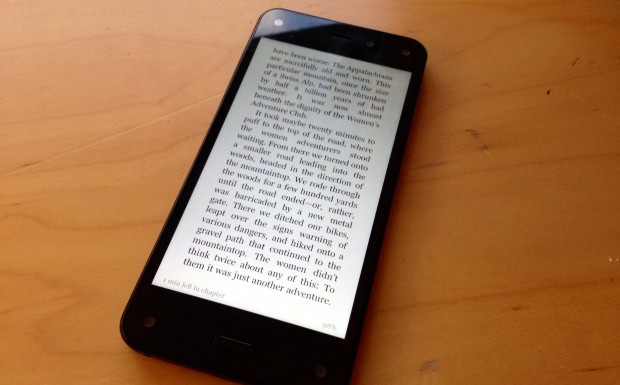 The auto-scroll update was complicated. It required Amazon to reformat the Kindle catalog to adjust from reading books the old-fashioned way, where the pages turn from right to left, to the phone, where users would scroll down. But missing the date for the software release does show the company was not willing to throw more resources at the problem.

Auto-scroll is a one example of how Amazon perceived it was going to disrupt the smartphone business. Its other magic tricks included a 3-D interface, one-handed gestures in the phone that allows the user to bring up side-panel menus and a service it calls FireFly, which allows you to conduct searches for products using the camera.

But it’s been said before: the hardware innovations weren’t enough. Many were hoping for much more, like an disruptive rate plan.

Typically, it’s Amazon’s strategy to offer hardware at low prices in order to attract more customers and eventually have them purchase content via Amazon. A lower phone bill, subsidized by advertising, would have encouraged this pattern. The nail in the coffin was surely the decision to launch exclusively with AT&T, which limited its potential customer base.

“To be successful from a hardware perspective, they have to increase their distribution partners,” said Ho, the analyst from 556 Ventures. He also said that Amazon needs to figure out what it wants to add to the operating system that the competitors already haven’t. Some of its strengths include its apps, including shopping, music and Kindle.

In fact, one thing Amazon did right was to bundle the phone with other services that Amazon customers use daily. But it didn’t go far enough this time around.

For instance, the phone comes with a free year of Amazon Prime, its popular two-day shipping membership program that comes with other perks, like free video streaming. In fact, the limited time offer is still in effect even though the cost of the phone has been marked down to 99 cents with a two-year contract. It also offered Unlimited Cloud storage for photos, something the competition does not provide.

Leaning on the things that customers already love about Amazon could have made for an interesting recipe. It could have attracted already die-hard Amazon customers. Plus, a tightly integrated approach would have kept customers locked into all-things-Amazon. That’s something other handset makers, like Apple, Google and Microsoft, use frequently to make switching to a new phone cumbersome.

If Amazon had focused on building a device off its existing strengths, it may not be in the position it is today. Instead, it simply tried to out-build the next guy. With the Fire Phone burning a hole in Amazon’s pocket, executives are undoubtedly behind closed doors re-evaluating the company’s approach.