Last week, we reported on the new CB Insights VC report, noting that Oregon had overtaken Washington in terms of quarterly venture investments for the first time since 1993.

Washington just edged out Oregon, with $88 million invested. That compares to $70 million invested in Oregon startups. However, the trend line isn’t that positive in Washington, which typically pulls in more than $100 million in venture capital each quarter and usually ranks in the top four or five states in venture financing.

Nationally, VCs invested $5.9 billion in 863 deals in the first quarter, a decline of 12 percent in deals and 15 percent in dollars compared to the fourth quarter.

Here’s a look at the disclosed investments in Washington state. 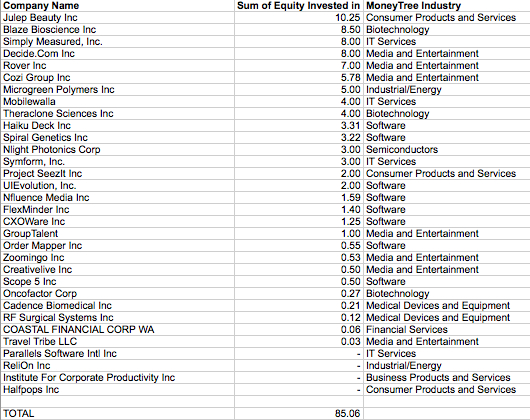 And here’s a look at Oregon deals, bolstered by two large deals in Puppet Labs and Urban Airship: