Silicon Valley may get all of the buzz.

But don’t underestimate the power of Seattle and its surrounding communities.

A new analysis by Bloomberg indicates that Washington state — home to Amazon, Expedia and Microsoft — is the most innovative place in the country. California ranked second, followed by Massachusetts, Connecticut and Oregon.

There are no shortage of studies ranking innovation centers and startup hubs, but Bloomberg’s analysis offers some hard-crunched data, looking at things such as patents, tech jobs and public tech companies in each state. The report notes:

Washington, known for rainy Seattle, abundant greenery and fleece-clad citizens, had the highest total score, not by topping any of the categories — California is highest in patent activity and five states have more skilled workers — but by placing near the top. That’s due to the large technology workforce, high productivity rates and plethora of public companies in aerospace, biotechnology and computer technology.

Apptio co-founder Sunny Gupta is quoted in the Bloomberg story about Washington state, one of the up-and-coming entrepreneurs in the region. Apptio raised an additional $45 million in venture funding earlier this year, and it is a top 25 company in the GeekWire 200 list of the top privately-held tech companies.

Of course, you don’t need to convince us that Washington is a top innovation hub, since GeekWire co-founder Todd Bishop and I have been covering the tech scene here for more than a decade. In that time, we’ve watched the rise of companies like Amazon, Tableau and Zillow, not to mention the arrival of Silicon Valley tech giants like Google, Facebook, Salesforce.com and eBay which have chosen to establish engineering outposts here, largely to mine the talented developers and engineers.

Even so, some folks across the country tend to forget that there’s a tech hub in this corner of the world, simply lumping in Seattle with Silicon Valley or forgetting us altogether. (See previous GeekWire reports: Hey everyone, Jeff Bezos lives in Seattle and Amazon is not a ‘Silicon Valley’ company…Hey, NYC: Thanks for finally recognizing Seattle but your infographic stinks)

According to Bloomberg’s analysis, tech companies make up 21 percent of the state’s public companies. That compares to 29 percent in California and Massachusetts.

The number of people working in STEM jobs (science, technology, engineering and math) came in at 2.82 percent of the total population. That compared to 2.26 percent in California, and 3.44 percent in Massachusetts.

Meanwhile, 9.5 percent of Washingtonians hold a science or tech degree — ahead of California, but just behind Massachusetts and Connecticut.

“This is the center of innovation,” Inslee said. “It is this group here this morning that really epitomizes what Washington is: The most innovative culture and place on the planet.”

And the least innovative places? That dubious honor goes to Wyoming, Mississippi and Arkansas, according to Bloomberg.

Here’s a closer look at some of the analysis. (Click on chart for all results). 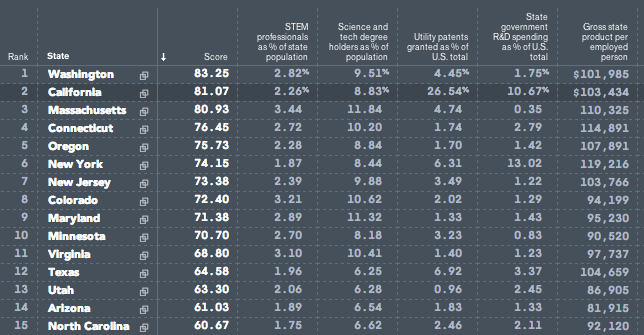