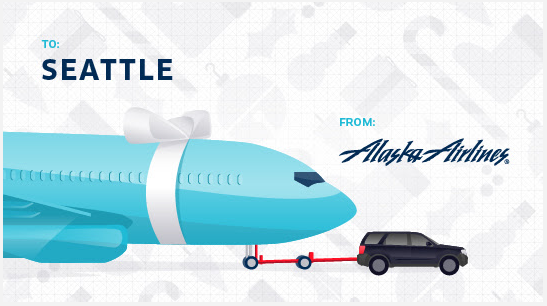 If you’re flying out of Seattle-Tacoma International on Dec. 23 or 24, Uber and Alaska Airlines are offering up a sweet deal: Free rides to the airport.

On either of those days, customers — whether or not they’re flying with Alaska Airlines — can simply use the Uber app to request a ride to the airport. Alaska Airlines will cover up to $50 for your ride, and you’ll need to pay for the remaining charges past that.

You won’t need to do anything special with the app — just request a ride to Sea-Tac and the discount will automatically be applied to all rides (one per user).

I just ran an Uber fare quote from downtown Seattle to the airport, and here’s what I got:

So, if you live more than 25-to-30 minutes from the airport, you may need to pay a few extra bucks. But still — having Alaska Airlines cover $50 of the ride is a nice holiday gift.

Worth noting here that Uber’s surge pricing model, which changes rates based on level of demand — rates often go up when more people need rides — will be deactivated during the promotion:

Meanwhile in Seattle, the City Council continues to debate the legality of ride-sharing startups like Uber, Lyft and Sidecar. Current proposals would limit the amount of UberX vehicles to just 100, and drivers would only be able to work 16 hours per week (UberX is different than Uber, which is categorized as a limousine service).

Those regulations have frustrated the companies, including Uber Seattle general manager Brooke Steger, who said that ”placing arbitrary limits on the number of drivers that can use the Uber app, and the number of hours they can drive, hurts all Seattleites.”