The Big Apple versus The Emerald City. Could this be an epic showdown over data geeks?

That’s the discussion in a story by New York Times reporter Claire Cain Miller who writes that New York and Seattle are “already sparring over which will be the next hotbed, beyond Silicon Valley, for educating these analysts of the future.”

The story itself is balanced, and does a good job of presenting both communities. It highlights the ambitious efforts of New York City Mayor Michael Bloomberg — who is launching a new science school in conjunction with Cornell University — and it points to the corporate money in Seattle — critical dollars that are supporting the University of Washington’s computer science department.

It concludes with newly-appointed UW professor Carlos Guestrin discussing the importance of large companies, with the computer scientist declaring that “the data is on the West Coast.”

But what gave me pause was the accompanying infographic, a flawed scoresheet in my view which reads more like something from the city’s economic development department. 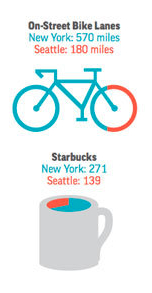 Yes, New York has more Starbucks and IT workers (they do have more people living there after all). Yes, there’s more in-city “green space” and apparently more on-street bike lanes in NYC (Uh, there are three National Parks within spitting distance of Seattle, not to mention green space and bike trails galore just a short drive away. New York touting more green space is like Seattle saying we have better pizza).

Venture capital is worth tracking, and that’s a known weakness in Seattle which needs some improvement. But why not analyze market values of public technology companies, or federal research dollars to universities or engineering offices of Silicon Valley companies (since the story centered on these topics).

I guess I can’t complain too much.

At least there seems to be some recognition of the fact that Seattle exists. You may recall my column from last May — Hey, NYC: There’s a tech hub out here called Seattle — in which New York barely mentioned Seattle in their New Tech City report.

I love Seattle, but I am not a pure homer. The region has its flaws, which I routinely point out. (See my earlier posts: Let’s stop the Silicon Valley comparisons, and take a look at why NYC is kicking butt and, just from this past week, VC investing tanks in Washington, overtaken by Oregon for first time since 1993).

I love what New York is doing in many respects — especially as it relates to the new Cornell NYC Tech school which is prominently featured in The New York Times today. The city has adopted a strategy around tech, and it is moving to execute on it.

It’s good to know that Seattle is at least on the NYC radar. It should be, given that some of the most important cloud computing companies in the world are based here.

I think both cities have a lot to learn from one another. And while educating and encouraging the world’s smartest geeks is certainly a critical factor in the success of a tech hub, so is this … a little luck.