Washington Gov. Jay Inslee, speaking to the crowd at GeekWire Startup Day this morning, suggested looking at the economy in a different way: Innovation Per Dollar (IPD).

Inslee noted that “people may not think of us as big as the Valley in that unnamed state to the south,” but he said he sees Washington state as the leader in innovative output as a ratio of investment and resources.

“I believe we lead the world in IPD right here in the state of Washington,” Inslee said. “It’s throughout our geekdom — it’s in aerospace, in energy, in transportation, in software, in the gaming industry.”

Inslee, making the opening remarks at Startup Day, celebrated the state’s ability to innovate and create with startups and entrepreneurship.

“This is the center of innovation,” Inslee said. “It is this group here this morning that really epitomizes what Washington is: The most innovative culture and place on the planet.” 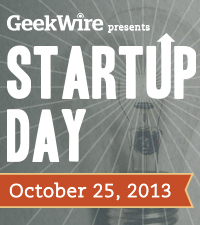 Inslee talked about how startups generate revenue for the state, noting a 318 percent increase in tax dollars generated from startups in the past few years.

He also outlined how he wants to make sure the state reduces overall risk for Washington entrepreneurs, and to provide what they need to succeed, like better tax credits, better talent coming out of our universities and an improved regulatory system.

Inslee also encouraged people to build companies that will come up with innovative ways to keep the environment healthy and energy clean. He said the state is “at a great risk right now,” in terms of carbon pollution and ocean acidification.

Inslee implored people to get involved in this space to help save the “most beautiful place in the world to live.”

“It’s an ambitious agenda, but I think the world is going to turn to the most important, most creative, most innovative people in the world, and that’s the geeks of the state of Washington,” he said. “Let’s go do good work.”

We’ll have more on GeekWire from Friday’s presentations. We’re hearing great advice and insight from industry leaders — here’s an agenda of today’s events. If you’re on Twitter, check the hashtag #gwstartupday to see what people are saying from today’s event.