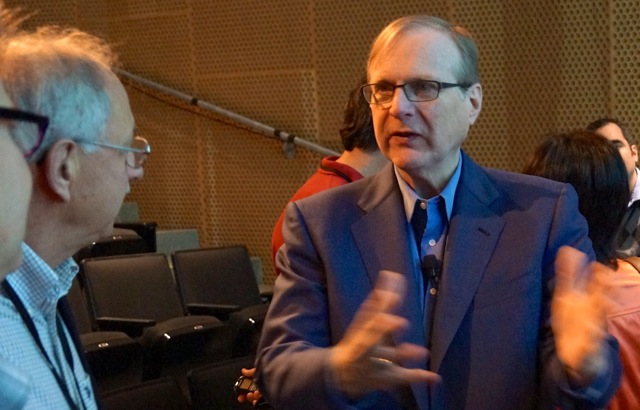 Over the past decade, Microsoft co-founder Paul Allen has committed $500 million toward understanding the brain through his Allen Institute for Brain Science — aiming to ultimately transform the treatment of related diseases and disorders including autism, Alzheimer’s disease, and depression.

And earlier this month, he launched the Allen Institute for Artificial Intelligence — “AI-squared,” as he calls it — tapping longtime University of Washington computer science professor Oren Etzioni to lead a new quest for the elusive goal of computers that can acquire human levels of knowledge, reason and understanding.

During a symposium today at his EMP Museum, marking the Allen Institute’s 10th anniversary, Allen explained how the two initiatives relate to each another.

“In a way, it’s a strange kind of race,” he said. “Can you create an artificial object or entity … before you understand how it’s done in the brain? It’s a kind of crazy race. I don’t know which horse to bet on. I’m betting on both. Both are fascinating.”

Allen, answering questions on stage from scientist and author Gary Marcus, cited IBM’s Watson as an example of progress, but made it clear that he’s aiming for bigger breakthroughs. For example, he said one of his hopes for the AI institute is to encode the knowledge of a portion of a biology text, to allow people to ask questions and get lessons from an intelligent system. He called that “an extremely hard problem.”

“The minute you start talking about language and knowledge representation, and listening to spoken words, that is invoking all of the brain’s language abilities, history, internal dictionaries, and the meanings of things,” he said. “It invokes a huge part of your brain to understand the evening news, much less a biology text.”

Allen said he’s optimistic about the new AI institute’s chances for advancing the field using “a bunch of cooperating algorithms that together have a power that goes far beyond what’s been done before.”

Later, Marcus noted that the uniform of Commander Data, the android from “Star Trek: The Next Generation,” is on display at the EMP Museum, as part of Allen’s sci-fi collection. He asked, how close are we to creating something on that level?

Allen responded, “We’re so far away from that level of understanding, but the thing that gets me excited (is that) these are the big questions — we’d all love to know how could you understand language, or create some kind of entity that was actually conscious. Those are the most fascinating questions! We’d all love to be working on those questions. So I love to be on the periphery of these things, and try to set the table.”