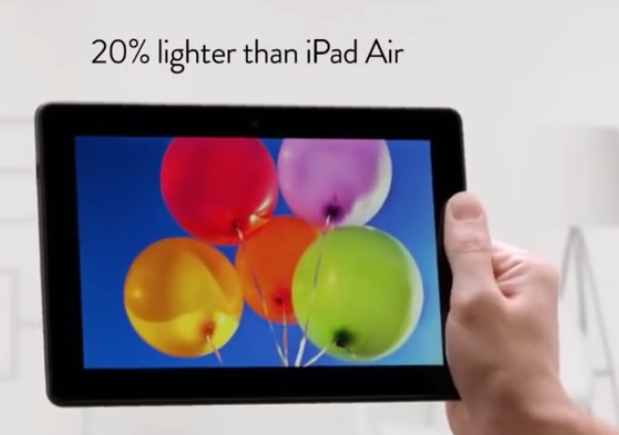 Just one month after taking a small dig at the iPad, Amazon is out with another commercial bashing Apple’s tablet.

In November, it was this Kindle Paperwhite spot quietly slamming the iPad’s apparent lack of brightness.

Now, Amazon is out with an ad for its Kindle Fire HDX tablet that uses Apple’s advertising style and Jony Ive to lambast the iPad.

“The Kindle is only $379,” the Amazon narrator says, as Mr. Apple quietly says “I see,” and lowers his iPad out of view.

This isn’t the first time Amazon has taken a few swings at Apple. And it’s certainly not the only Washington-based tech giant doing so, as Microsoft continues to slam the iPad and tout its Surface tablet with a variety of advertisements.

Most recently, Microsoft published an ad featuring two fake Apple employees — perhaps one mimicking Ive — ridiculing aspects of the new iPhones during an internal meeting with a man who looked to be either Tim Cook or the late Steve Jobs. Microsoft took the advertisement down within hours, though.