Here is the big surprise unveiled by Amazon on 60 Minutes tonight: The company is working on an R&D project to create autonomous flying delivery drones — miniature octocopters, to be precise — that could zip packages through the air directly to customers’ doorsteps in as little as half an hour.

The company calls the project “Amazon Prime Air.” Amazon CEO Jeff Bezos says in the segment that it will take years to implement the project, at least four or five optimistically, and one of the biggest hurdles will be convincing the FAA that it’s safe. But he says the project is realistic.

Coinciding with the piece, the company released a webpage and FAQ about the project — saying, among other things, that it could be ready to deliver packages in this way as early as 2015, if the FAA’s new rules for unmanned aerial vehicles are set by that point.

The company also released this video demonstration of the project …

Here’s the full “Prime Air” FAQ, as published by the company.

Q: Is this science fiction or is this real?

A: It looks like science fiction, but it’s real. From a technology point of view, we’ll be ready to enter commercial operations as soon as the necessary regulations are in place. The Federal Aviation Administration (FAA) is actively working on rules for unmanned aerial vehicles.

Q: One day we’ll see a fleet of Prime Air vehicles in the sky?

A: Yes. One day, Prime Air vehicles will be as normal as seeing mail trucks on the road today.

Q: When will I be able to choose Prime Air as a delivery option?

A: We hope the FAA’s rules will be in place as early as sometime in 2015. We will be ready at that time.

Q: How are you going to ensure public safety?

A: The FAA is actively working on rules and an approach for unmanned aerial vehicles that will prioritize public safety. Safety will be our top priority, and our vehicles will be built with multiple redundancies and designed to commercial aviation standards.

This is part of an ongoing push to by Amazon to get closer to customers to increase delivery speed and efficiency. It’s also part of a broader effort to implement robotics as part of its distribution system, exemplified by its acquisition of the Kiva Systems warehouse robotics company last year.

Given the use of Prime in the name, this would presumably be offered as a benefit (or perhaps at a discount) to people who belong to Amazon’s $79/year subscription program. We asked for more info on that part of the plan, but Amazon says those types of details are still awhile away from being released.

The 60 Minutes segment has already aired on the East Coast, and the program starts at 7 p.m. Pacific. In a 60 Minutes Overtime piece, the news magazine’s staff recalls the way Amazon teased them before unveiling the plan. Bezos told them, “If you can guess what it is, then you’re very lucky, and I will give you half my fortune and send you to Vegas with it.”

Here’s another picture from Amazon showing a close-up view of the Amazon Air prototype. 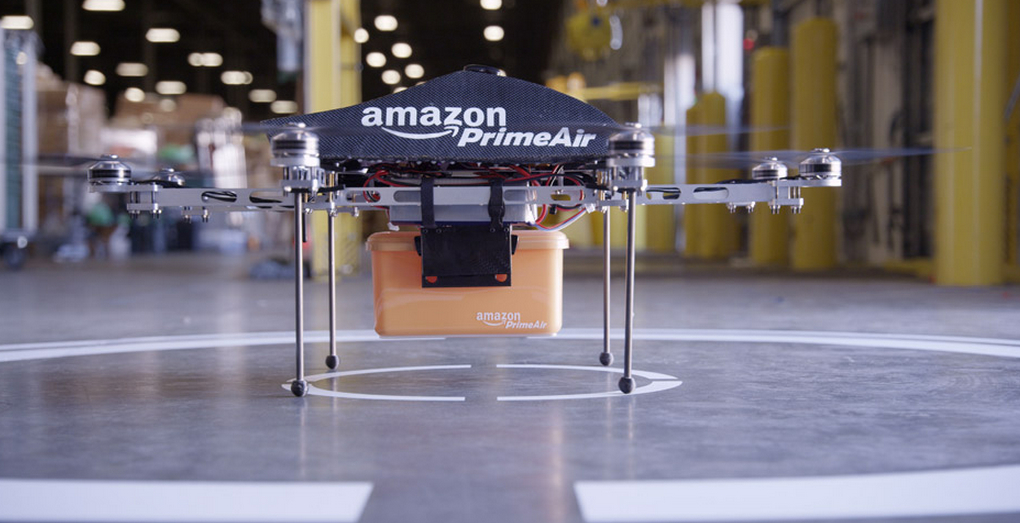 UPDATE: Here’s the full segment on Amazon from 60 Minutes.