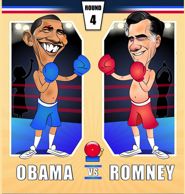 Last night’s final presidential debate produced some of the best zingers of the campaign, with President Barack Obama sounding off about “horses and bayonets” and former Governor Mitt Romney proclaiming that he likes “American cars.”

Tracking all of the action throughout the campaign has been Seattle startup Hark, one of the biggest repositories of audio clips on the Internet. As we’ve reported in the past, Hark is growing fast as it compiles clips from movies, TV shows and commercials. As of this spring, when CEO David Aronchick appeared on the GeekWire podcast, it was attracting some 50 million visits per month.

But it is also making the most of this election cycle, with Aronchick using it to highlight what he dubs “the world’s largest sound bite platform.” So, without further ado, here you go. (Click on the audio icon in the graphic to give a listen).

Meanwhile, here’s the list of the top 10 soundbites as compiled by Hark.

1. “The 1980’s are now calling to ask for their foreign policy back.” – President Obama

3. “The greatest national security threat is a nuclear Iran.” — Romney

7. “We spend more on our military than the next 10 countries combined.” – Obama

10. “Unfortunately, in nowhere in the world, is America’s influence today greater than it was four years ago.” — Romney

Here’s a look back at the top sound bites from the second debate:

Here are the clips from the first debate, which drove more than 20,000 visits to Hark over a two-day period in part because of the classic “Big Bird” comment from Romney: