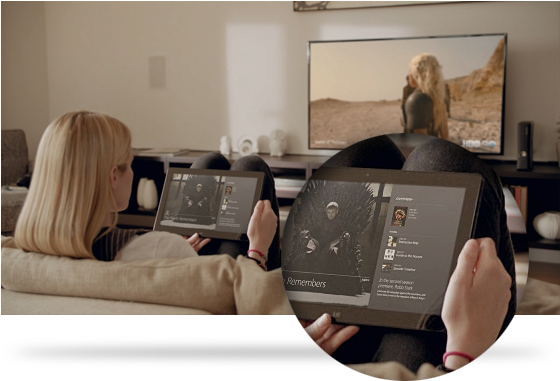 Microsoft is starting the rollout of Xbox SmartGlass this week with the launch of an app for Windows 8 that lets people use their tablets and PCs as “second screens” for the Xbox 360 — controlling and interacting with the console from Windows, and viewing extra information about games and other content.

Xbox unveiled the SmartGlass technology earlier this year. SmartGlass for Windows 8 will launch with the new operating system on Oct. 26, followed by a SmartGlass app for Windows Phone 8. SmartGlass apps for iOS and Android are also on the way, but the company is only saying that they will be released “soon.”

One of the neater tricks is the ability to use a control the new Internet Explorer browser on Xbox Live using a smartphone or tablet — entering text, pinching to zoom, or swiping to pan as a way of controlling the browser on the big screen. The company is rolling out IE for Xbox as part of the fall Xbox Live update this week.

Other uses of SmartGlass include the Xbox Music service and sports apps including the new NBA Game Time.

Here’s a Microsoft video running through the SmartGlass basics.