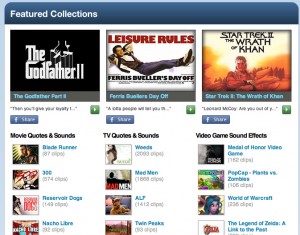 YouTube may be the king of online video. But Seattle upstart Hark is making a play to become the top destination for audio clips, including more than three million funny movie clips; offbeat TV quotes; poorly delivered political speeches and other weird sounds. The company, led by entrepreneur David Aronchick, just announced that visitors to the site listened to 150 million audio clips during the month of February. That followed a record month in February in which Hark attracted just over 50 million visits, making it the No. 5 site in the entertainment-movies category and bigger than Flixster and Rotten Tomatoes combined.

Some of the most popular listens in early 2012 included Whitney Houston’s final interview; Octavia Spencer’s acceptance speech at the Academy Awards; President Obama’s impromptu covers of Al Green’s classic “Let’s Stay Together” and other audio clips from the GOP primary campaign trail. Aronchick said the growth came through both word-of-mouth buzz as well as improvements in search engine optimization.

Aronchick was our guest on the GeekWire podcast last month. Here are excerpts from that interview:

Todd Bishop: I think of Hark as YouTube for audio clips, and I know you probably won’t say that. But how do you describe what Hark is?

David Aronchick: No, that’s fine. And that’s certainly how we started out. Hark has really grown enormously, and we are much more than just audio clips. You know: quotes, text, sound bites, images from pop culture. And when I say pop culture, I mean literally everything across the board: video games, movies, TV, politics, news, religion, education, business on and on and on. People are desperate to find the quotes, the images — the little bits of the things they love the most and then be able to share them across the Web. That’s what we do best.”

John Cook: How did you come up with the idea?

Aronchick: “It was my buddy and me. We were sitting around quoting movie lines to one another, just like I am sure plenty of your listeners do as well, and we ended up settling on a line from War Games…. The WOPR computer said: ‘Shall we play a game.’ And we thought it was hilarious and wouldn’t it be great to make it the ringtone on our phone kind of thing, and we started looking around for it. And we just realized how hard it was — number one to find that content and number two — once we found it to get it down into a reasonable format and number three be able to share it over Twitter and Facebook and those types of things. And when we found that it was that hard to find something that we knew there was that much consciousness around we immediately decided to kick it off and launch a project to help studios do that.”

On the importance of social networking:

Aronchick: “That sharing is what we consider the most powerful and most valuable thing. We have this incredible viral loop, when people share for example to Facebook — one share ends up bringing back about 3.5 users back to the site, so it just feeds on itself.”

John Cook: Who is the demographic of this and have you analyzed that at all?

Aronchick: “Yeah, we definitely have. It is a lot of people just like me thankfully, younger people who grew up on movies and TV and pop culture, sitting around quoting whatever it might be: Your favorite video game back-and-forth to each other. People come in and they just sit there and listen to six or seven at a time, they love it.”

Todd Bishop: How do you make money. I know you have ads on the site. Is that your primary method for money?

Aronchick: “Yeah, primarily right now, we are an ad-driven platform. And unlike a lot of other sites out there that sit on this entertainment meta-data, what we do is we share a lot of the revenue back to the studios, so we are really a partner for them, rather than a competitor. And that can be really positive. That said, we are just getting started. We think very strongly that derivative content is a huge win long-term for the studios.”

Todd Bishop: So by derivative content, you mean people taking those little snippets out of The Godfather or other movies and distributing them around?

Aronchick: “Yeah, it is really an interesting study. There’s been this whole kill Hollywood meme going around where people are like: ‘We need to revolutionize the way Hollywood makes money.’ The fact is that Hollywood already — those movies that you see in the theater they only make up about a quarter of the revenue that Hollywood sees. Fully three quarters of it comes after the releases to theatric, and those could be things like DVD or Blu-Ray, they could be streaming … or they could be things like paid TV or free TV or even things like selling TVs and posters and things. There are just a lot of things down the line…. And the studios are looking at more ways to make money, and to do that is to take the hard work that they have already done — this incredibly large movie theatrical release — and letting people make more money off it in other ways.”