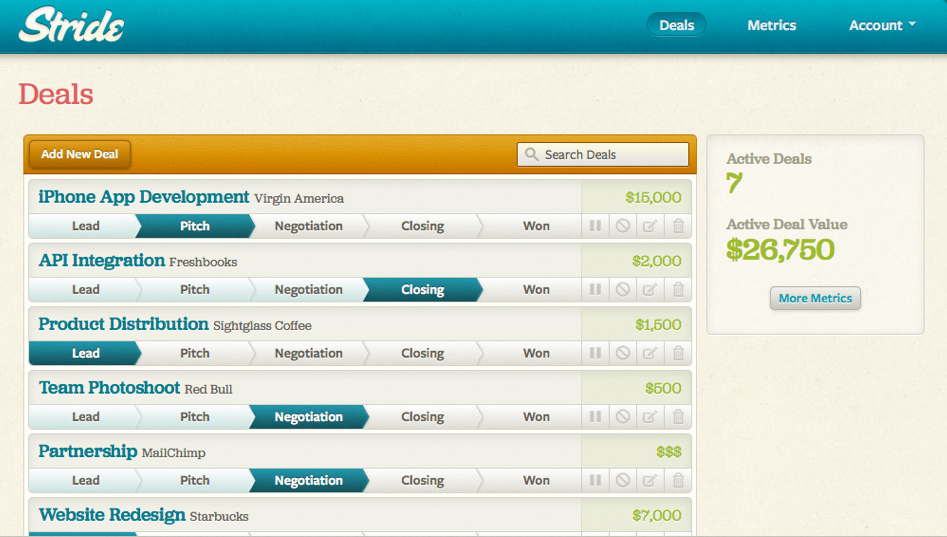 Andrew Dumont has worked in marketing and business development roles for a few years now, and until recently he has yet to find a customer relationship management system that really fits his needs.

“All sales tracking and CRM applications are complex, clunky, and made for full-time salespeople,” says Dumont. “Freelancers, small business owners and business development folks, like myself, are left in the dark with a load of useless features that end up getting in their way.”

Built over a few weekends, Dumont says that they set out with the mission of creating something “warm, simple and beautiful.” Those are words that you usually don’t hear uttered in the same sentence as CRM.

With Stride, users enter in deals and track them through the sales process. The company, which just entered private beta, is offering 25 free entries with unlimited entries available for $7 per month. 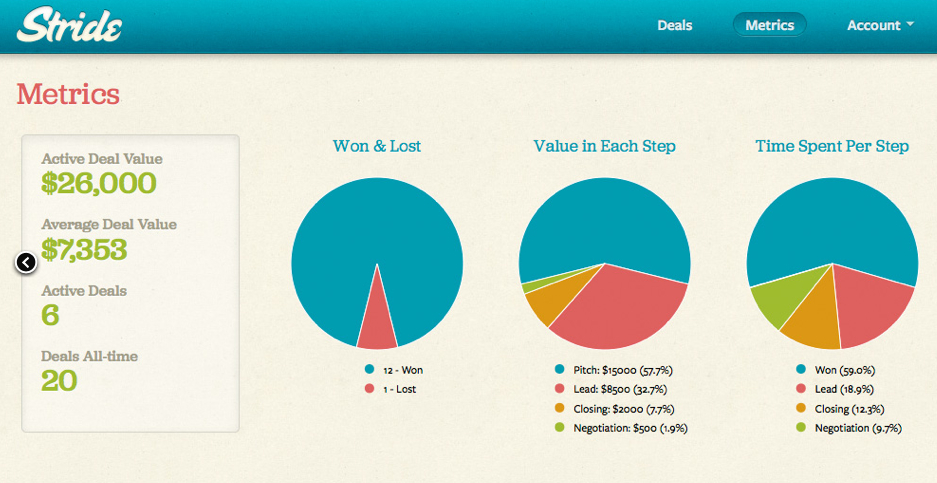 Of course, there’s no shortage of online tools available for managing sales leads, with Salesforce.com the big kahuna in the category. Others include Highrise, Capsule and Base, but Dumont said that even those which claim to be simple oftentimes are “more complex than helpful.”

The company is off to a strong start, propelled in part by a story on TechCrunch which noted that Stride “looks attractive, simple and accessible.”

Since launching on Thursday, Dumont said that they’ve attracted more than 1,000 users and just over 1,200 deals have been created. Stride has also seen more than 20,000 page views to its Web site.

Dumont — who remains in his business development role at Seattle’s SEOMoz and is working on Stride in his spare time — thinks it is catching on because it is a part of what he calls the “consumerization of sales tracking.”

“I too faced similar problems with all of the CRMs I tried to use for my work. They’re all far too complicated and clunky for someone that doesn’t do sales as their primary function, even the ones that claim simplicity like Highrise, Base and others,” Dumont tells GeekWire. “That’s how we’re competing, with simplicity (removing un-needed features), user experience and price. You can feel the difference the moment you log in.”

GeekWire readers can get into the private beta of Stride by using the code: geekwire.