Posting from Austin: Meet someone at this year’s South by Southwest Interactive festival, and your first questions are likely to be the same. What do you do? What are you working on? Seen any cool sessions? And, oh, what do you think of Highlight?

It seems Highlight — a mobile app in the newly emerging “ambient awareness” space often mentioned in the same conversation as competitors Banjo, Glancee and Sonar — was the festival’s app king even before SXSWi kicked off Friday.

To varying degrees, Highlight and crew all work like this: You sign up with Facebook, Foursquare, Twitter and the like and go about your day, they run your phone’s GPS in the background, and once in a while they notify you when someone who shares your interests or your social connections is nearby.

Of course, when you’re a geek at SXSW, that’s pretty much all the time. 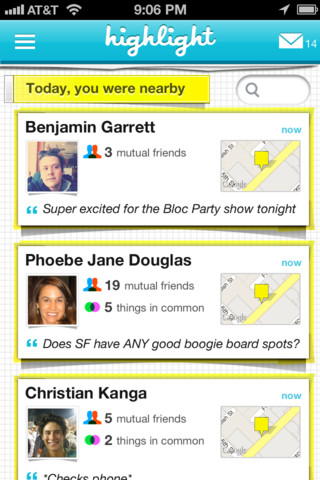 There’s a big reason Highlight has become the, um, highlight of this group of apps: the tech press prefers it. Back in January, Mashable called it “the most frictionless manifestation of the [ambient awareness] idea yet.” Earlier this month, Eric Eldon of TechCrunch put it above Glancee and the new Foursquare in the race for king of SXSW. Two weeks ago Robert Scoble pitched Highlight and Glancee as the two hot apps to watch at the festival, but more recently outlined reasons he thought Highlight would be the hit.

I signed up to Highlight just before coming to the festival, and downloaded Banjo after I ran into the team in the halls of the Austin Convention Center Friday. Glancee and Sonar are on my phone as of this morning, and I’m kind of afraid to unplug my phone from its charger. Background GPS drains phone batteries. Despite assurances from all these apps that they’re working on the problem, I feel like I’m springing a leak.

Is it worth it? So far, yeah. Highlight lets me see who’s within steps of me and what mutual friends and interests we share, and Banjo, with similar functionality, also tells me when people I follow on Twitter are just around the corner. They’re not perfect. Banjo sends Twitter direct messages to folks near you on your behalf without letting you alter the text (though it does ask your permission to contact them), and with geeks swarming SXSW, hearing about everyone who shares even one Facebook-shared interest with me — we both “like” Mashable. Who doesn’t? — is a lot of noise.

The apps seem useful — even critical, new as they are — in a conference environment like SXSW. But can they possibly hit the mainstream when even Foursquare has trouble turning location sharing into a habit for the majority? There’s value in this ambient networking thing when your goal is to hang out and meet people, but what about in your daily life — when you go shopping or take a walk in your neighborhood? Can these apps deliver enough value to find a home there? 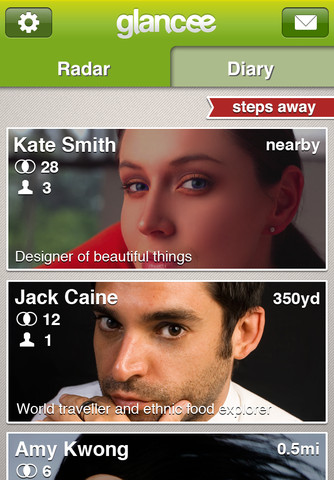 I had a chance to chat about this with Scoble last night, and what he said was interesting. Highlight could succeed where apps like Foursquare have not because of one key difference — “ant trails.” On Foursquare you need to check in for the app to gather information about where you go and what you like to do. But Highlight follows you over time, gathering data it can use to deliver another level of value in the recommendations it surfaces about the people you could meet and the interests you share. It’s on the horizon, and it could be amazing.

The possibilities sound pretty exciting to geeks like him, me and probably you. But something tells me it’s going to take a lot of trust for a lot of people to get on board with sharing that kind of information, consistently, even with these small, new companies jumping into the personal privacy debates with good intentions and clean slates.

Will a win at SXSW bring Highlight to the wider world?

Stay tuned. In the meantime, do you plan to try any of these apps? If you do, let us know what you think.