We first covered Solavei in February when we stumbled across the company, a story that has driven intense discussion from critics and supporters alike. Today, Solavei is taking wraps off the offering, saying that it plans to launch a $49 per month wireless service in September that rides on the backbone of T-Mobile’s nationwide 4G network.

In addition, the company confirmed in an interview with GeekWire that it has raised an additional $3.6 million in funding from notable investors that include Jonathan Miller, the chief digital officer at News Corp. and former CEO of AOL; David Limp, vice president of Kindle at Amazon.com; and Gary Adams, an oil & gas executive from Oklahoma. Total funding in Solavei now stands at $7.7 million, with plans to raise up to another $7 million.

White, who represented Washington’s 1st Congressional District before going on to serve as CEO of the technology lobbying group Technet, said that the new money will be used to fund operations and launch with a “bang” in the coming weeks. Solavei already has 140 full-time employees and contractors, not to mention about 2,000 associates who’ve agreed to test and market the new service once it goes live.

There are a lot of companies already offering wireless service on the backs of other networks. But White said the “genius” of Solavei is the marketing arm, which allows customers to earn $20 per month on every three mobile-service members that they or someone in their personal network adds to Solavei. The company dubs this a “Trio,” promising that those at the higher end of the network (with 2,000 “Trios”) could earn as much as $20,000 per month.

White scoffed at those critics who’ve labeled Solavei a pyramid scheme, saying that the company plans to follow the rules associated with multilevel marketing companies.

“You’ve got a new era coming here where the whole phenomenon of social networking is making the idea of people-to-people marketing a lot different, and a lot more exciting than it used to be,” said White, who is leading legal and policy for Solavei. “If you are a multilevel marketer, there are some rules you have to follow and … we will follow all of those rules that apply to us. We really think we are doing something just a little different. We are trying to take a new era of social networking, and all of the tools we have available, and try to figure out a way to monetize that for consumers, not just the company.” 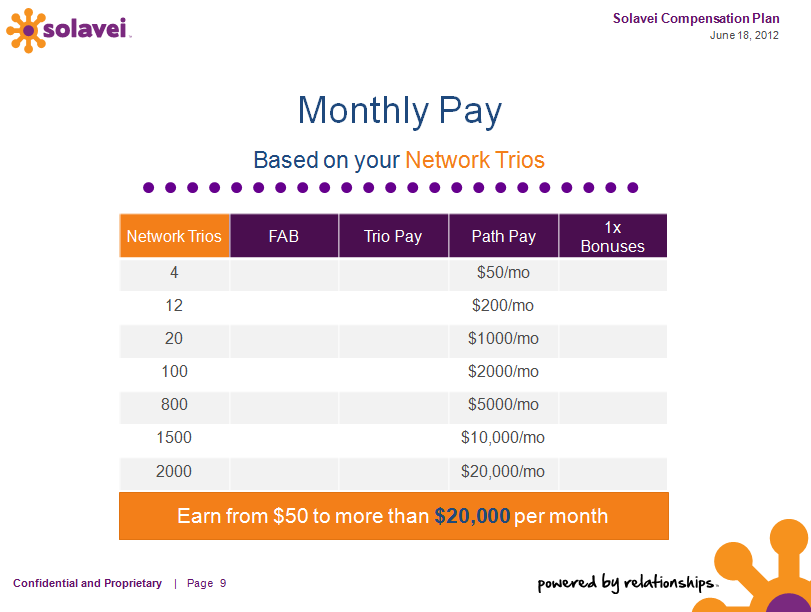 White said the reaction to Solavei has been enormously positive, adding that they are “hitting a demographic who really can take advantage of this.” For most people, he said adding a few hundreds dollars per month in recurring revenue can change lives.

“Most Americans, that’s a big deal. It helps them buy a car, so the kind of response we’ve gotten has overwhelmed us,” he said. “We thought we’d be a little bit more in stealth mode than we are able to be right now because we’ve had such good response to it. It just seems like we are in a niche of a market to whom this makes sense.”

The company’s marketing materials indicate that its goal is to “create millions of thousandaires.”

White said that about 10,000 people have expressed interest in signing up for Solavei, with about 2,000 people testing the phones right now. “We’ve got a lot of very energetic people, people talking about it more than we thought they would be doing these days,” he said.

Solavei plans to sell HTC phones at cost to customers, but individual also will be able to port some existing GSM-based phones to the new service.

Solavei is led by Ryan Wuerch, who stepped down as CEO of Bellevue-based Motricity last year after results disappointed Wall Street. In a release today, Wuerch said that Solavei is a transformational company.

“We are going to make a difference in people’s lives by shifting billions of dollars from traditional mass-media advertising into the greatest advertising vehicle today – people,” Wuerch said. “Solavei is the first company to create an economic linkage between mobile service, social commerce and social-networking technology.