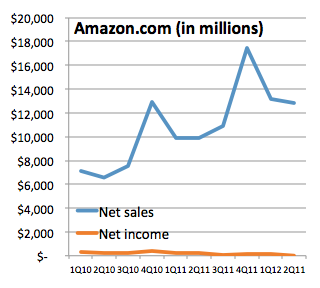 Amazon just reported earnings per share of $0.01 for the second quarter — yes, that’s one cent — coming in slightly below Wall Street’s already modest profit expectations of 2 cents a share.

The company’s net sales came in at $12.83 billion, up 23 percent from the same quarter a year ago, but also somewhat below the consensus of analysts polled in advance by Thomson Reuters.

Amazon said costs associated with the acquisition and integration of the Kiva Systems warehouse robot company contributed to the lower-than-expected profits.

Amazon’s employee base continued to grow, reaching 69,100 people as of the end of the quarter, including people at its Seattle headquarters and distribution centers around the world. That was up from 65,600 at the end of the first quarter.

Following its traditional practice, Amazon didn’t disclose specific sales of Kindle e-readers or the Kindle Fire tablet, but noted that the Kindle Fire remains the best-selling product on Amazon.com.