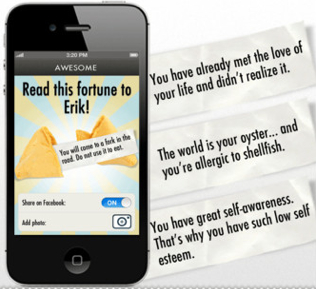 Erik Blachford helped build Expedia into one of the world’s largest online travel agencies, helping people from distant lands connect with one another. Now, the former CEO is looking to bring people together with a different approach: humor.

Blachford just launched a new iPhone app called Dinamundo, which he said encourages face-to-face connections to share a joke or a laugh. The idea is that friends can check in to one another, just as they check-in to a location via Foursquare.

“Users just scan QR codes on each others’ phones and are rewarded with funny fortune cookies to read out loud,” Blachford said. “Actual real life communication, a radical notion I know.”

The app is free, and the QR code approach allows users to connect in person in order to launch jokes written by up-and-coming stand-up comedians. A few examples:

“Stop doing such a thick Spanish accent when you order a burrito.  You’re making the staff uncomfortable.”

“As long as you keep smiling and nodding, no one will know how lost you are.”

And, in case you’re wondering, the company plans to keep the humor clean. So no raunchy jokes.

“Our jokes are spicy, not dirty, and are meant to provoke a laugh not a blush,” according to a description of the app. In addition to the jokes, there’s a game layer where users of the app can find other nearby players in order to unlock new fortune cookies with additional jokes.

Here’s more of how the Players Near Me function works:

Users can post their fortunes to Facebook, and can use the app to keep track of the friends with whom they’ve “done the Mundo.” Dinamundo’s technology puts players into the “Players Near Me” list whenever the app is opened, and respects privacy by allowing users to opt out of the feature. The list has an approximately one-mile radius, geared towards a night out on the town and special events. 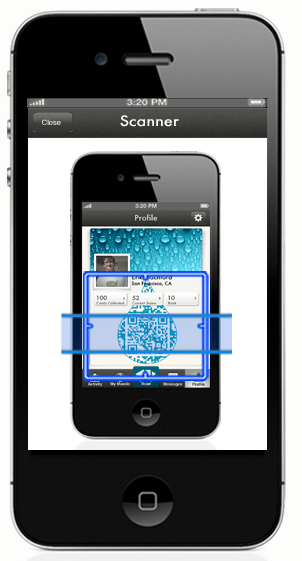 Expedia is now a multi-billion dollar business, so is there actually money to be made with Dinamundo?

“We might make some money from sponsors once we get enough consumer use, but I think the real business will be in selling a custom version to events and conferences that are in need of a fun icebreaker app to help attendees make connections,” Blachford tells GeekWire.

The company is comprised of two engineers and a product manager, and has raised a bit of seed funding from True Ventures.

Blachford currently lives in San Francisco, but he still has plenty of roots in the Seattle area. He serves on the board of Zillow, and remains active as an angel investor in the community. (Decide.com and Zapd are among his recent bets).

“I am doing the classic seed-stage startup basically. Mostly because I wanted to do the idea. But the more I do — the more I like how I am walking a mile in the shoes of so many entrepreneurs who pitch me,” he said.