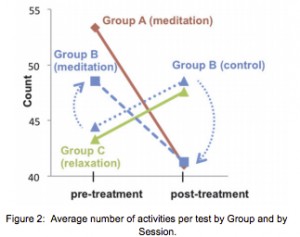 As if you needed one more reason to convince your boss that you need a break at work, the University of Washington released a study today showing evidence that meditation reduces stress and helps with multitasking on a computer.

Before training, the participants were given a stress test to measure their multitasking abilities, including using e-mail, calendars, IMing, word processing and the plain old phone. Participants were scored on speed and accuracy, and their levels of self-reported stress and memory were also noted. Then each group underwent their particular brand of training (or not, in the control group’s case) for eight weeks.

The findings? Pretty interesting. After training, the meditators reported lower levels of stress than the other two groups. Other benefits to the ohm method included being able to spend longer time on tasks, and switching tasks less often but still achieving the same amount of work in the same time.

Need more evidence? The control group underwent the same meditation training after the initial eight weeks, and then they, too, reported lower levels of stress during multitasking activities and greater abilities to concentrate.

The profs are encouraged by their findings. Levy says in a release, “While there is increasing scientific evidence that certain forms of meditation increase concentration and reduce emotional volatility and stress, until now there has been little direct evidence that meditation may impart such benefits for those in stressful, information-intensive environments.”

The UW study, however, did not determine whether your HR person would actually return your e-mail about your unused vacation days.