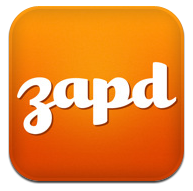 People must really want to build Web sites, and build them fast. Zapd, the new iPhone app developed by Seattle entrepreneur Kelly Smith, today provided an update on the adoption of the mobile application after its first two weeks in existence. Zapd has recorded more than 100,000 downloads via iTunes, with sports fans, photographers and artists using the application to create Web sites in a matter of minutes.

But Smith isn’t content with those numbers or the positive reviews. His goal? Hit one million downloads for the free app.

“Zaps have been used as vacation logs, lunch logs, wedding albums, memorial tributes, event calendars, classified listings, and evenpersonal resumes,” Smith writes in a blog post. “Our users are teaching us (hundreds) of unique ways to use and share Zaps each and every minute. Incredible.”

Smith tells GeekWire that’s he’s been overwhelmed by the uptake of the app, buoyed in part by Apple featuring Zapd in the “What’s new and hot” category in the App Store.

The company is now looking to bolster its staff, and put their heads down on releasing an Android version. Zapd is backed by a group of investors that includes former Zillow.com CEO Rich Barton; former AtomFilms CEO Mika Salmi; Second Avenue Partners’ Nick Hanauer and Mike Slade; and former Expedia CEO Erik Blachford.

Previously: Zapd: ‘We built it, they came, but Facebook pulled up the drawbridge’

[Editor’s note: Kelly Smith is the founder of Inkd, which is one of GeekWire’s partners].