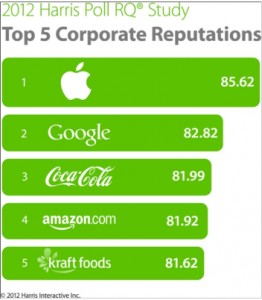 One of the most fascinating aspects of the latest Harris Poll Reputation Quotient study is that Amazon.com continues to bolster its brand, even as most Americans have little physical interaction with the company.

Amazon.com ranked fourth in the study, up from eighth place last year.

The survey, now in its 13th year, asks Americans to measure the reputations of the 60 most visible companies in the country.

Here’s what they study noted about Amazon.com:

Interestingly, Amazon.com, which has no storefront and very limited human interaction, scores highest in the Emotional Appeal dimension — this is the core strength of its reputation.  In terms of supportive behavior, customers report considerable confidence in Amazon.com and several other companies.

The report goes on to note that 71 percent of respondents said they would “definitely buy” from Amazon.com in the future (compared to 70 percent for Kraft Foods and 64 percent for Coca-Cola). Sixty four percent said they’d recommend Amazon.com to others, while 34 percent said they’d “definitely invest” in the stock. (That compares to 23 percent who’d invest in either Microsoft and Coca-Cola).

In its own hometown of Seattle, Amazon.com is even a bit of a mystery. But, even so, the company has continued to bolster its brand. (Here in Seattle folks have a few more touch points with the company given its new HQ in the South Lake Union neighborhood as well as the Amazon Fresh grocery delivery service).

Apple has gained the top spot in the study, knocking Google off of its perch. In fact, Apple scored the top score in the history of the 13-year study, and led in four of the six categories. (See chart below).

“We are seeing the emergence of a group of companies that garner reputation equity by being positively associated with multiple industries,” said Robert Fronk, executive vice president and Global Corporate Reputation Practice Lead for Harris Interactive.  “Companies like Apple, Google, and Amazon.com combine innovation and leadership across multiple business areas, giving them true competitive advantage.” 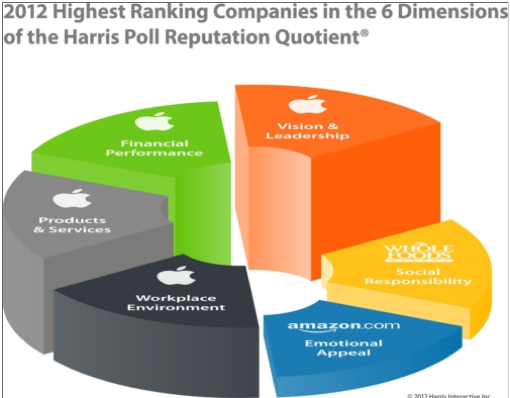