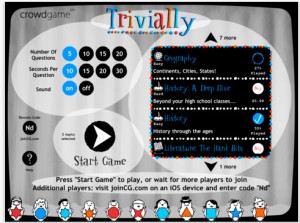 Steve Cellini didn’t set out to create yet another mobile trivia app. After all, there are already plenty of those floating around.

Instead, the Seattle entrepreneur and brains behind CrowdGame wants to transform the way people deliver trivia questions, removing the old-fashioned paper-and-pen systems that most folks have used for years.

As Cellini sees it, the iPad can double as a powerful game console and smartphones (stuck in everyone’s pockets these days) can act as the controllers. CrowdGameTrivially, which was just released in Apple’s App Store, allows up to 11 iPhone-wielding participants to answer questions displayed on an iPad.

Divided into 18 categories such as history, geography, science and sports, the game is free to play. Expansion packs, with additional questions, cost 99 cents. In addition to choosing the categories, game players can select the number of multiple choice questions they’d like in each round and the time limit for each question.

“The approach is to enable multiple users, in a crowd, to play real-time, interactive experiences against the app,” explains Cellini, a former manager at Microsoft and Decho. “We had to start some place, and trivia seemed like a good place to start. It is not a 30 frames per second, first person shooter.”

Cellini has been tinkering on the technology for more than a year, noting that the networking components of having mobile devices seamlessly communicating with the iPad over Wi-Fi was no easy technical task. A first attempt didn’t work well, supporting only six iOS devices.

“It was clear that it wasn’t going to scale to where we wanted,” said Cellini, adding that the new version is a complete “re-write” of the app.

Interestingly, CrowdGame does not require an app download on the iPhone, with users able to go to joincg.com on their iOS device and participate in the selected game. The Web page is actually served off the iPad, which creates a more seamless experience, Cellini says

“If you tried to go up to the cloud and back down, it would not be as responsive,” said Cellini, adding that the goal of the company is to create an experience that is portable, multi-user and multi-display.

One limiting factor at this time is that the system only works with iOS devices, meaning those carrying Android or Windows Phone devices are out of luck if they want to join in on the fun. 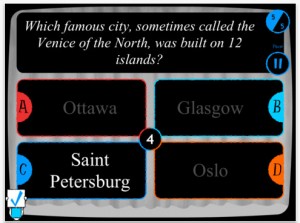 Cellini said that an Android version is in the works. He’s also designing a system by which individuals can create their own customized trivia games. For example, Cellini said at GeekWire’s game night last week, a customized set of tech-oriented trivia questions could have been created. That’s an especially appealing idea for pub trivia quiz masters, an area where Cellini sees a lot of opportunities.

But he also said customized question packs could be created for birthdays, funerals or bar mitzvahs — anywhere crowds of people gather.

At this point, you can not play the game individually on an iPhone, and the questions only appear on the iPad. Cellini said that was a very intentional decision.

“With thousands of game apps out there, we are trying to do something that is special and that is hard,” he said. “As far as I know, no one else is doing this…. We are trying to do a great job on trivia, but this is almost a proof of concept. The goal is to lay out this pattern, and use this technology in as many different areas as possible.”

Cellini said that he sees applications in education, with students able to use the game aspects to learn a language or vocabulary. He also sees potential in the business environment, using it for agenda setting or other tasks.

“The real goal is to turn out multiple apps, and enable as many experiences as possible,” he said.