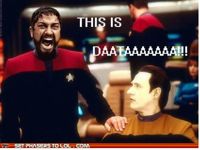 Cheezburger may be best known for funny cat photos with captions, and the occasional break dancing mishap on Fail Blog. But now the comedy maestros at Cheezburger are opening up a new chapter.

The Seattle company — which scored $30 million in venture capital earlier this year — just rolled out a series of sites in which they are attempting to capture all things geek.

The first, Set Phasers to LOL, offers a full slate of Star Trek, Star Wars, Batman and Doctor Who humor.

It’s not a surprise that the Ben Huh-led startup is expanding into the world of nerd humor, especially given that the company is basically made up of a bunch of tech geeks. (Remember, Huh was just earlier this year named by GQ as one of the 15 worst-dressed in tech, which should certainly bolster his geek cred). 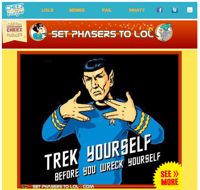 Cheezburger operates a network of about 50 comedy Web sites, and the startup is now attracting more than 20 million monthly unique visitors.

The company’s mission is dead simple: “make everyone in the world happy for five minutes a day.”