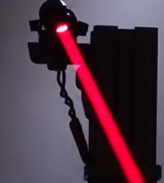 LaserMotive, a company south of Seattle developing ways of beaming power via lasers, has been named as one of the participants in a new NASA technology project that aims to provide external power sources for future aerospace vehicles.

The NASA initiative, called Ride the Light, was announced last month, and LaserMotive announced its participation this morning.

“The technologies pursued in this effort have the potential to revolutionize both space launch and on orbit operations, we are happy to be working with LaserMotive and all of our partners to make power beaming a reality,” said NASA’s Charles Taylor in a news release this morning.

Following a first phase of studies, NASA is slated to make an implementation decision next year.

LaserMotive, based in Kent, won the 2009 NASA Power Beaming Challenge, and has set world records for laser-powered helicopter flight with small, remote controlled copters. Here’s a company video explaining what it’s working on.