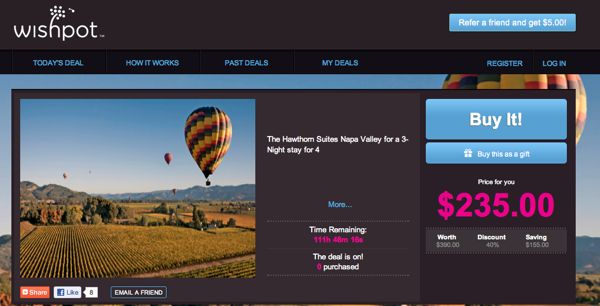 Wishpot faces no shortage of competition with its new daily deal service for travel. After all, in the past few months Groupon and Expedia have launched a new daily deal offering, and upstarts like Seattle-based Off & Away have expanded into deals for hotel rooms.

Nonetheless, Wishpot — led by CEO Max Ciccotosto — is looking to make waves in the industry with a new offering that promises discounts of up to 60 percent at destinations such as Hilton Head Island, Lake of the Ozarks and Steamboat Springs.

The deals are provided through a partnership with Preferred Guest Resorts, which touts itself as an “affordable vacation-resort network.”

But the company is already running into headwinds with its first deal, an offering for a 3-night stay at the Hawthorn Suites in Napa Valley.

As a reader of the company’s blog notes, the deal is only valid for two adults between the ages of 25 to 72 who have a combined household income of $75,000 or more.

The company apologized for the income requirement, noting that the Napa Valley deal is only one where that is the case.

Wishpot started as an online gift registry in 2006, but has since diversified its offerings. The company recently unveiled a new service called Venpop designed to help retailers expand their offerings in social media channels such as Facebook and Twitter.

It is backed by Curious Office Partners and others.