Having just heard of Steve Jobs’ passing, I feel compelled to recall the three times I met Steve, and to summarize what was so special about his life and work.

I was a 17-year-old high school student and computer hobbyist living in Oklahoma City. I had a job working for the first personal computer store there, a shop called High Technology. We were a regional distributor of Apple Computer products, and so we were invited to attend the first exhibit of the Apple ][ at the Consumer Electronics Show (CES) in Las Vegas in January of 1978.

The owner of High Technology, Charles Weddington, gave me the opportunity to come along. I was excited to take my first “business trip” and meet my idols, Steve Jobs and Steve Wozniak, the (to me) famous inventors of the Apple ][.

We were welcomed by the core Apple group. Besides the “Steves,” I especially recall meeting Randy Wigginton, who was just a bit older than me and I think Mike Markkula and Michael Scott (an early investor and the CEO of Apple at the time). We helped run the show booth, and hung out together after the show floor was closed.

At the time, the Apple ][ was a primitive machine. It did not yet even have a disk drive, and required the user to load programs from their own cassette tape recorder plugged into a socket in the back of the machine. Driving around town with Woz and Randy was exciting as they discussed the completion of the first Apple ][ diskette interface (known as the Incredible Woz Machine) and software. 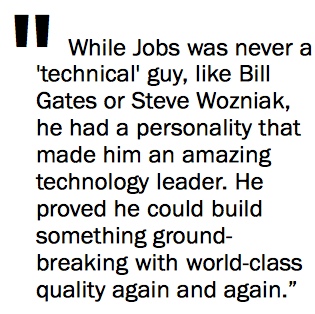 Back at the Apple hotel suite, I remember Jobs being very excited about the future. He was always talking about what a momentous time in history we were a part of.

It was then that I brought out a cassette to show them. I had translated a program from an HP minicomputer to run on the Apple ][ “high res” graphics. It used vector graphics to make a line drawing of a reclining nude. At the time, Apple had not published any software for creating high-res graphics, so everyone was excited to see my program.

Even in the early days, the two Steve’s displayed very different personalities.

Woz was very open and friendly. He was happy to take time to explain details of the high res graphics hardware to me, a 17 year-old high-school student.

Jobs was a bit more dismissive, and, at times, even rude. Other than the “High-Res Lady” incident, I don’t think he took much notice of me. But I did feel that he had a sense of his own destiny and that of Apple, which was exciting to be around.

After graduating from MIT, Apple was on my short list of companies I wanted to work for. I had heard of the (then secret) Macintosh project, and I sorely wanted to be a part of it.

As I was waiting for my interview, Jobs strolled through the lobby and stopped to say “hi.” I don’t think he remembered me and he was too busy to stop for a longer chat.

The interview didn’t go well, as I really was looking to develop software, and they wanted me to work in the hardware group. (It worked out for me, though, as my first job at Microsoft was to develop the first application software for the Macintosh).

By 1987, Jobs had been kicked out of Apple, and had started a new computer company, NeXT. Steve desperately wanted Microsoft to develop their popular line of application software for it. 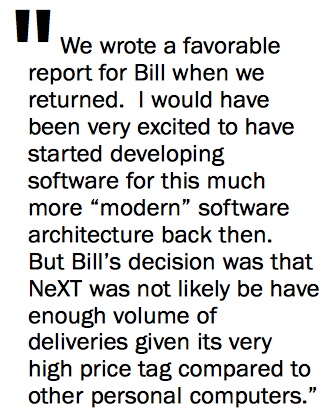 I was the most senior Macintosh application developer at Microsoft at the time (many of my peers having moved on to Windows application development) so Bill Gates asked me to visit Steve at NeXT and evaluate what they were doing from a technical perspective.

Another Microsoft developer and I went to NeXT’s new offices in Palo Alto. After signing the appropriate non-disclosures, we were given a grand tour of the hardware and software development environment they were building (which, ironically, is now the foundation behind all Apple’s Macintosh and iOS software).

Steve was much more attentive and friendly in this day of meetings than I had ever seen him in the past. I think it was because he really wanted something from Microsoft, and wanted us to be favorably impressed.

We actually were very impressed. The hardware was beautiful and sexy. The operating system design was very modern and much more sophisticated than either Windows or Macintosh. And the technical team Steve had assembled was amazingly talented.

We wrote a favorable report for Bill when we returned. I would have been very excited to have started developing software for this much more “modern” software architecture back then.

But Bill’s decision was that NeXT was not likely be have enough volume of deliveries given its very high price tag compared to other personal computers, and it would have taken too many of our limited resources to create a 3rd line of development for this machine.

The inspiration behind five Apple revolutions:

While Jobs was never a “technical” guy, like Bill Gates or Steve Wozniak, he had a personality that made him an amazing technology leader. He proved he could build something ground-breaking with world-class quality again and again.

Revolution I: The driving force behind the creation and marketing of a truly personal computer, the Apple ][.

Revolution II: He created and personally led a group of internal “pirates” at Apple to bring the personal computer into the modern era of graphical interfaces with the Macintosh.

Revolution III:  He assembled the team at NeXT that built the first “true operating system” for personal computers. (This was not one that could be called a “toy” as were the first Macintosh and Windows operating systems, and it occurred while Apple was frittering away its lead in a partnership with IBM working on the PINK OS).

Revolution IV: Breaking the vice grip of the telephone carriers by creating a open platform for mobile application development on the iPhone.

Revolution V: Reinventing portable computing with the creation of the first popular tablet computer, the iPad.

I never found Jobs to be a “nice guy.”

But I don’t think he cared about being perceived that way. He set a very high standard of performance for himself and for everyone he worked with, and pushed them to do their best.

And he ended up changing the world, over and over again.

Mike Koss is a Seattle developer, entrepreneur and angel investor who worked at Microsoft from 1983 to 2002. You can follow him on Twitter @mckoss.