It’s the hottest thing on Foursquare and FarmVille. Now, Avvo — the online Q&A site for medical and legal advice — is adding game mechanics to its popular forums. The Seattle company announced today that it is adding virtual rewards and leaderboards, a move by Avvo to deepen the engagement of its more than 120,000 contributors.

But will lawyers and doctors — many of whom are already richly rewarded with physical rewards like high salaries and lofty titles — bite? 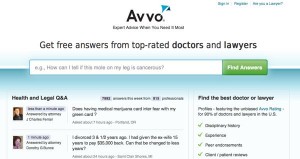 Sendi Widjaja, chief technology officer of Avvo, whose team built the new gamification system internally, hopes so. Widjaja said the game layer provides “an additional element of enjoyment” to the Q&A forum and “recognizes the doctors and lawyers that consistently contribute expert advice.”

He added in a statement: While Avvo’s experts are intrinsically motivated to provide guidance on Avvo, most people enjoy and are further motivated by friendly competition and recognition.”

Just like in Foursquare or FarmVille, the doctors and lawyers on Avvo will receive points for participating in certain activities on the site, answering forum questions or writing guides. They also earn points when the information they create is marked as “good” or shared in social networks.

Founded in 2007 by former Expedia executive Mark Britton, Avvo rebranded as a Q&A site in September. The company has raised $23 million from Ignition Partners, DAG Ventures, Benchmark Capital, and others.