Meet the country’s newest multi-billion dollar Internet company. It is Pandora, the music radio service which went public today with a market value of about $3 billion.

The amazing thing about the IPO is that Pandora, which is trading on The New York Stock Exchange under the ticker “P,” is still losing a lot of money in the face of very heated competition. Among its rivals are services from Amazon, Apple and Rhapsody.

But that didn’t deter investors who sent the stock above $20 per share, up more than 25 percent over its elevated $16 offering price. 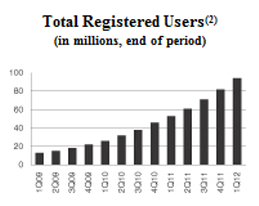 Pandora, which lost $6.7 million on revenue of $43 million during the first quarter, is growing fast as seen in the accompanying chart.

The company boasted more than 90 million registered users at the end of the first quarter, and during the company’s last fiscal year it streamed 3.8 billion hours of online music to listeners.

But the competition section of the Oakland company’s S-1 does indicate some challenges, including threats from Seattle companies such as Amazon.com and Rhapsody.

Here’s what Pandora had to say about Amazon and other tech giants getting into the online music business:

“We believe that companies with a combination of financial resources, technical expertise and digital media experience also pose a significant threat of developing competing internet radio and digital audio entertainment technologies in the future. In particular, if known incumbents in the digital media space such as Amazon, Apple, Facebook or Google choose to offer competing services, they may devote greater resources than we have available, have a more accelerated time frame for deployment and leverage their existing user base and proprietary technologies to provide products and services that our listeners and advertisers may view as superior. Our current and future competitors may have more well-established brand recognition, more established relationships with consumer product manufacturers, greater financial, technical, and other resources, more sophisticated technologies or more experience in the markets in which we compete.”

And here’s what they said about Rhapsody:

“We face competition from providers of alternative forms of audio content and pre-recorded entertainment, such as Apple’s iTunes Music Store, Amazon, online subscription on-demand music providers such as RDIO or Rhapsody, as well as potential market entrants like Spotify, which provide audio content that can be directly selected, streamed or purchased, and played in automobiles and homes, using portable players, mobile phones and other wireless devices. The audio entertainment marketplace continues to rapidly evolve, providing our listeners with a growing number of alternatives and new media platforms.”

Pandora, as listeners well know, is largely an advertising based business. So, in that regard, it may not compete as closely with Amazon and Rhapsody as say Last.fm or Slacker Personal Radio.

In fact, in an interview with GeekWire earlier this year, Rhapsody CEO Jon Irwin applauded Pandora’s success and described it as “training wheels” for the “on-demand subscription service that the RealNetworks’ spin-off offers.

Nonetheless, users have flocked to the free Pandora service. Rhapsody claims more than 750,000 subscribers, a small fraction of the 90 million listeners that Pandora claims.

Will the economics work for Pandora?

Rhapsody, Amazon and a host of other companies will certainly be watching.