Microsoft co-founder Bill Gates held on to his title as richest American with a net worth of $59 billion, marking the 18th year in a row that the software pioneer and philanthropist has led the Forbes list.

But Amazon.com founder Jeff Bezos continues to climb the charts, finishing in 13th place with an estimated net worth of $19.1 billion. (In 2009, Bezos ranked 28th on the list with a net worth of $8.8 billion).

This year’s standing at 13th was just ahead of Facebook co-founder Mark Zuckerberg, another rising star who now has a net worth of $17.5 billion. (At 27, Zuckerberg is by far the youngest in the top 50).

Here’s a look at the richest in Washington state. (By comparison, Oregon just has one person on the list: Nike creator Phil Knight). 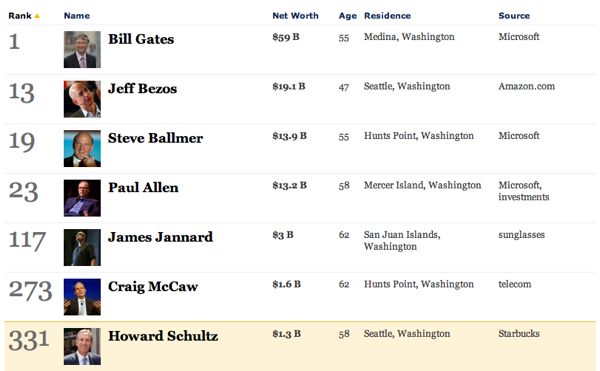