Black Friday is upon us again, with a ton of deals available over the next few days. But while many retailers are offering unbelievably low prices on some tech items, they aren’t always worth it, even with the discounted price.

GeekWire combed through hundreds of deals to pick out some of the best around for Black Friday. Unless otherwise noted, these deals start on Nov. 26 and should run through Nov. 28. We’ll update this post as more deals come out.

One of the best times to buy a new TV is over the Black Friday-through-Cyber Monday weekend. With 4K seeming like it’s here to stay, there are a bunch of great deals on the latest in Ultra HD displays. Perhaps the best deal is the 60-inch 4K Vizio M60-C3 from Dell for $799, down from $1,199.

Those familiar with Roku may want to check out the TCL 55-Inch 1080p Roku Smart LED TV. Instead of a normal smart TV, it has a Roku built in for easy access to many of your favorite streaming options. It’s just $349, $200 off the regular price.

Amazon will also offer some deals, including an unknown 50-inch TV for $149, through its mobile apps, so be sure to check those out before pulling the trigger on anything.

Perhaps the worst Black Friday deals are those on computers. If the discount is huge, it’s usually because the computer is outdated or underpowered. But that doesn’t mean there aren’t some gems out there.

If you’re looking for a gift for the artist with an iPad in your life, check out the Pencil. No, not the Apple Pencil, which only works with the iPad Pro, is in short supply, and is $99. The Pencil by FiftyThree is a smart stylus that’s designed to work with FiftyThree’s Paper iPad and iPhone app. The Pencil is available from GeekWire Deals this weekend for $45, down nearly 25 percent.

The last-gen Microsoft Surface Pro 3 is getting a $300 discount from Best Buy, down to $999.99 for the i5 version. If that’s not the version you’re looking for, Microsoft is offering $200 discounts to other models, and $150 off the Surface 3 with a Type Cover.

The gamer on your list can get a new Alienware laptop for $1,199. The 15.6-inch gaming laptop comes with 8GB RAM, a 1TB hard drive and a Core i7 processor.

Amazon’s Fire tablet isn’t anything great, but if you’re looking for something to serve as small TV for your kids or to play basic smartphone games on a slightly bigger screen, it’s a pretty good deal at the normal $50 price. But for the shopping holiday this weekend, Amazon is offering it for just $35. 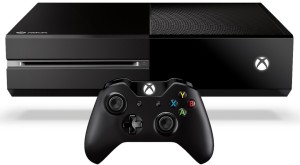 The holidays are a great time to upgrade your video game setup. The Xbox One and Playstation 4 are both down to $299, the lowest price ever for the current-gen consoles. If you’re still rocking a 360 or PS3, this is a great chance to upgrade. We’re getting to the point where all the good games are only coming out for the newer consoles, or they look like crap if they’re still on the old ones.

Nintendo fans can also get in on the action: Walmart is selling the Nintendo 3DS XL for $179.

If you’re buying for someone a little more musical, you may want to check out some hot headphone and speaker deals.

Amazon is offering close to the lowest price ever on the Jaybird X2 Sport Wireless Bluetooth Headphones, down $50 to $129. They’re a great option for runners who don’t want to get tangled up in traditional headphones, especially with the stay-in wings.

For something with a little more oomf, the Beats Solo2 are more than half off at $97 from Target. Or if you’re looking to play some tunes for the room, Amazon has discounted the excellently rated UE Boom Bluetooth speaker to $100.

However, if you want something a little smarter, Amazon is also discounting their Echo smart Bluetooth speaker. Thanks to the warm response from customers and critics alike, Amazon has frequently updated Alexa, the brains behind the Echo, with more and more skills. The Echo is on sale for $149, $30 off its usual price.

Not every deal is for physical products; digital downloads are also seeing some big discounts this holiday weekend.

Redmond-based puzzle technology startup Puzzazz is offering buy-one-get-one-free ebooks of puzzles online and through its iOS app. The free book shows up as a coupon, which can be transferred as a gift.

The awesome iOS and Android game Lara Croft GO is down to $3 for Black Friday. It’s a quickly learnable puzzle game that’s perfect for your flight home, offering steadily more difficult levels with just the right amount of challenge.

Cloud storage is a great solution for making your stuff available on any internet-connected device. Amazon is trying to get more users on its cloud service with a year of unlimited cloud storage for $5, which is 92 percent off the standard price.

We’ll continue to update this post as we find more deals on great products.