More than half of all PCs are now on Windows 10, according to new figures from Net Applications. It’s an important milestone for the operating system, even as Microsoft continues to move away from Windows as a “cornerstone” of the company.

Windows 10 boasted a market share of 51 percent at the end of August, while Windows 7 — still popular with a dedicated group of users — fell to a 30.3 percent market share. Windows 10 passed Windows 7 in market share for the first time in January. 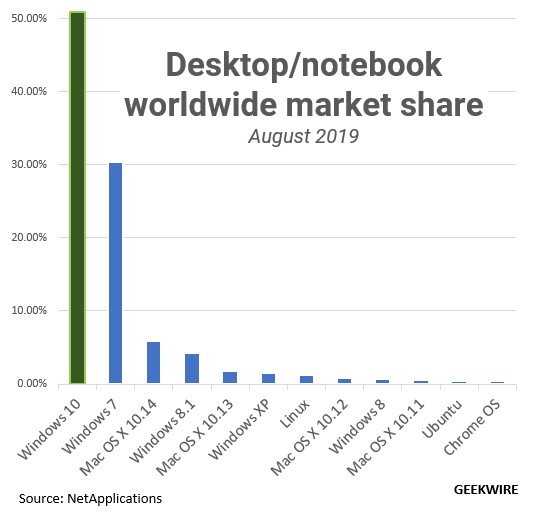 Microsoft launched Windows 10 back in 2015 with a lofty goal: Get the new operating system on more than 1 billion devices within two to three years. The tech giant has fallen short of that goal, but Windows 10 has spread widely, hitting 800 million devices as of May.

For the Windows 7 hold-outs, the clock is ticking on their favorite operating system. Microsoft will stop providing security and software updates for PCs running Windows 7 on Jan. 14, 2020. The tech giant has a website dedicated to the change that includes a push to upgrade to Windows 10. The most stubborn Windows 7 fans will still be able to use the operating system after next year’s end of support date passes, but Microsoft warns their devices “may become more vulnerable to security risks and viruses.”