The latest numbers from market research firm Futuresource are slightly better news for Microsoft in a U.S. K-12 education market dominated by Google and Chromebooks.

U.K.-based Futuresource Consulting has released its fourth-quarter and full-year 2017 estimates of shipments of mobile personal computing devices (which Futuresource defines as everything except desktop computers) into K-12 schools globally. In Q4, Microsoft saw a small uptick in the shipment share of Windows into the U.S. K-12 market, from 22.3 percent in Q3 to 25.6 percent in Q4. That 25.6 percent was also the highest Windows was able to achieve in any quarter in 2017.

The biggest Q4 loser? Apple, which saw its iOS and Mac OS percentages in the U.S. both drop. 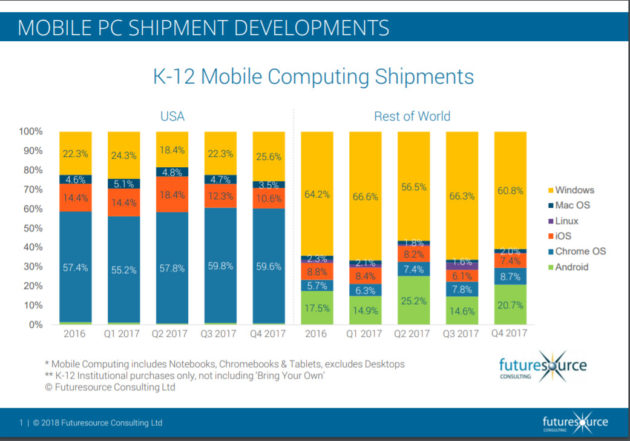 Another fourth-quarter bright spot for Microsoft was the inexpensive school laptop category as it decided to take on the perceived cost advantage of cheap Chromebooks. Ben Davis, senior market analyst at Futuresource, said in a statement that, “The sub-$300 price category saw the largest rise in share, growing 6 percent year-on-year, in part thanks to Microsoft and its OEM partners launching a raft of lower-cost education-focused Windows devices in recent past.”

It was a victory that Microsoft wasted no time trumpeting.

All is not edtech exclamation points for Microsoft, however. For the full year, Futuresource said Chrome OS accounted for 58.3 percent of device shipments in the U.S.

Worldwide, including the U.S., the situation is more competitive: Windows OS led global K-12 shipments for 2017 with 43.5 percent, and Chrome OS had 31.3 percent. Futuresource said Windows has lost ground to Android in Asia Pacific, while more Chromebooks are being adopted in Canada, Northern Europe and Australasia.

Earlier this year, Microsoft pulled out all the stops in promoting its education efforts in London at Bett, the world’s largest education technology trade show. Among the many announcements were even more low-cost Windows 10 devices for education, for a total of more than 40 school-friendly systems.

RELATED: Microsoft confirms Windows 10 S will become a ‘mode’ in other versions, no longer a standalone product