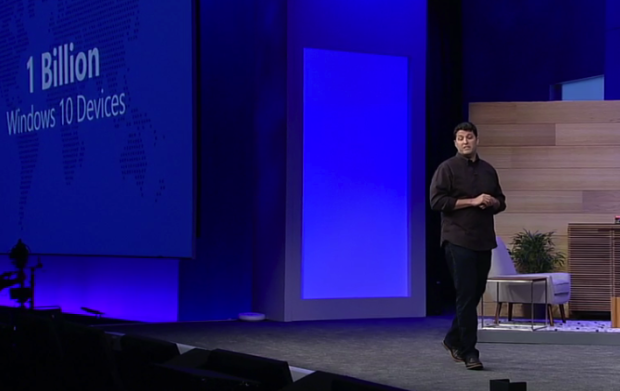 Microsoft is making its pitch for Windows 10 to developers at its Build conference in San Francisco this morning, and the company just set a high bar for the upcoming operating system.

“Our goal is that within two to three years of Windows 10’s release there will be 1 billion devices running Windows 10,” said Terry Myerson, the company’s operating systems chief, addressing the crowd from stage.

“No other platform version, in any ecosystem, is available on 1 billion devices,” Myerson said, citing current estimates of 500 million devices for Android KitKat, and noting that Apple’s iOS 8 is lower than that.

Those comparisons are key. Microsoft needs to show developers that it can still provide a critical mass of users for their apps, across all types of devices, even as Google and Apple eclipse Microsoft’s Windows Phone and dedicated Windows tablets. This follows the earlier news that Windows 10 will be available as a free upgrade for Windows 7 and 8 users.

In addition, Myerson announced that Windows Phones will include an Android subsystem that lets developers reuse all of the Java and C++ code from an Android phone app to create apps for phones running Windows 10. “An app can be written that takes advantage of the Android code but also the extensions you would write in the Windows platform to really delight the Windows user,” he said.

In another big move, Myerson announced that developers will be able to compile Objective C code from Apple iOS apps inside Visual Studio on Windows, allowing them to leverage that code to create Windows apps.

Myerson also announced that Microsoft will be rolling out a new “Windows Store for Business,” giving companies and schools a new way to distribute their line-of-business applications to users. In another move to appeal to developers, the company said wireless carrier billing for apps and content will be available across Windows 10 devices, not just on phones.