Howard Schultz took a lot of heat this week after announcing that he’s seriously considering running for president in 2020 as a “centrist independent” candidate. But his confidence has not wavered.

“Let me be very clear. I have a deep sense of humility about the degree of difficulty of this,” Schultz said on Thursday in Seattle. “I’m not a messiah. I know how stiff this climate will be and that no one has ever done this before. But that doesn’t mean it can’t be done. It would be un-American to say it can’t be done.”

Loud cheers welcomed Schultz as he took the stage in his hometown at Moore Theatre, sitting down for an hour-long interview as part of a nationwide book tour that perhaps feels more like a campaign. A packed crowd at the free event was mostly supportive of the former Starbucks chief, aside from the occasional murmur or jeer.

“I’m here because of my love of America and my profound concern for where we are as a country,” Schultz said in his opening remarks.

Outside the building, the mood was less welcoming.

Around 50 protestors gathered on a brisk winter evening to demonstrate their opposition of Schultz’s intention to run for president. Many were concerned that a Schultz candidacy would make it easier for President Donald Trump to be reelected.

“Howard doesn’t understand American history,” said Steve Christensen, a Sammamish, Wash. resident who held a sign that read ‘A Double Shot of Stupid.’ “He shouldn’t be running as a third party candidate. All he’s going to do is probably guarantee that Trump will get a second term. He can’t win. This is a two party country.”

Tula Holmes, a painter and writer from Renton, Wash., said she is “terrified” of a third party candidate who would hurt the Democratic Party. She said Schultz would be better off using his fortune in other ways.

“Goodness, he lives in Seattle. Look under every bridge and every freeway ramp. Do something about the homeless, do something here,” Holmes said. “There’s a lot he can do with his wealth other than divide the Democratic Party.”

Schultz, a self-described lifelong Democrat, said he would not proceed if it was clear that his presidential run would result in a second term for President Trump. He hears the critics who recite names of other unsuccessful third party candidates such as Ross Perot and Jill Stein. But he said “my mind is open.”

“I think there are millions of Americans, who believe as I do, that the system is broken, the system is rigged, and there’s a better opportunity,” Schultz said during the on-stage interview with Mónica Guzmán, co-founder of local news site The Evergrey.

With the hashtag #ReimagineUs projected on a screen above him, Schultz on Thursday rehashed stories from his book, From the Ground Up: A Journey to Reimagine the Promise of America, which details his hardscrabble upbringing and challenges he faced at Starbucks, where he was CEO from 1986-to-2000 and 2008-to-2017 (See GeekWire’s review of the book here).

Under Schultz’s leadership, Starbucks not only became a tech-focused global coffee powerhouse but also an innovator in employee treatment. Schultz helped roll out new initiatives such as healthcare benefits for part-time workers or free college tuition through an online program with Arizona State University.

“Everything I’ve tried to do in my life, with regard to Starbucks, has been to try to balance profitability with a level of conscious and responsibility,” he said. “Not that Starbucks is a proxy for the country, but what we’re really talking about is leadership. And what we have a void of in America is leadership.”

But Schultz balks at the prospect of the federal government providing similar widespread benefits to Americans, going against the platforms of some possible Democratic presidential nominees for 2020. 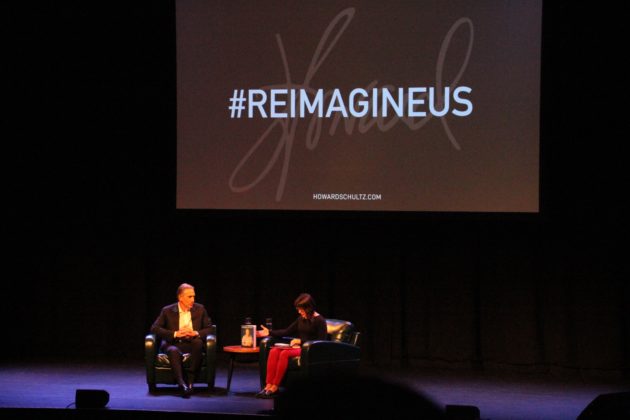 Schultz didn’t divulge many specifics about his stance on divisive issues. But he did explain why he isn’t running as a Democrat, calling out the hopes of his would-be competitors to provide free healthcare and college for all, and a “government job for everyone.”

“The Democratic Party, as it stands today, is espousing almost every day very progressive policies that I think are unrealistic, not affordable, and really a false promise,” said Schultz, who was whisked away from reporters after his appearance on stage.

He made a few local tech industry-related comments. Schultz said he “would just like to ask the question, especially in the city of Seattle, a city of such entrepeneurialship and imagination … is there a better opportunity to reframe the future of the country, to reframe the promise of America, and really give people the hope and aspiration that so many millions of Americans unfortunately have lost?”

Schultz also commended Microsoft for its recent decision to spend $500 million to address housing and homelessness issues in the Seattle region. He said that speaks to the role and responsibility of public companies, noting that “we have somewhat of a crisis of capitalism in the country.”

Schultz has dominated headlines this week as critics debate his potential 2020 run. Many Democrats voiced their concern about how it could help President Trump get reelected. During an appearance on The View Tuesday, co-host Joy Behar told Schultz that “your entry into the race will guarantee Trump another four years and we cannot have that.”

Others say that a Schultz candidacy could be good for the country. From The Wall Street Journal editorial board on Wednesday:

The way progressives are denouncing Howard Schultz, you’d think he is Donald Trump’s first cousin. The former Starbucks CEO said Sunday he might run for President as an independent in 2020, and Democrats have since been shrieking like teenagers at a horror movie. They seem to fear a policy debate, which is exactly why a Schultz candidacy could be good for the country, including Democrats.

These early attempts to suppress a candidate because of his political independence are at best anti-democratic and at worst a new kind of political bigotry. Schultz deserves a chance to make his case, and our country would be better for it. Furthermore, he could win.

Schultz, who was heckled during a book tour event in New York City on Monday, started tweeting for the first time this week. He quickly drew criticism, including from President Trump, who tweeted Monday that Schultz “doesn’t have the ‘guts’ to run for President!”

Asked on Thursday about the negative reaction online to his announcement, Schultz said “I’m not trying to win the Twitter primary.”

“I’m trying to win the hearts and minds of the American people,” he added.

Speaking to the Seattle crowd, Schultz had to address the Seattle Supersonics, a local NBA team he sold in 2006 to owners that quickly relocated the team to Oklahoma City two years later. As he does in his book, Schultz apologized for what he described as a “terrible mistake” that remains a sore spot for many longtime Seattleites.

“The lesson is, when you have power and responsibility like I did with the Sonics, you must demonstrate strength,” he said.

The apology won’t sit well with Jason Reid, director of Sonicsgate, a documentary film that chronicles the history of the professional hoops franchise and the departure from Seattle.

“He’s always been full of empty rhetoric,” said Reid, who was passing out copies of Sonicsgate among the protestors outside Moore Theatre. “He’s been talking like a presidential candidate for a decade now. His words are empty. He’s proven to citizens of Seattle that he lied and betrayed us and we’re here to hold him accountable still.”