Howard Schultz might as well have named his latest book, “I am running for president. And this is why you should vote for me.”

If you’re remotely curious about what’s motivating the Starbucks-made billionaire to unseat Trump, you might want to read it.

From the Ground Up: A Journey to Reimagine the Promise of America is no memoir, as Schultz says in the beginning. It’s more a condensed platform for his arguments of why he’s considering a run for president, interweaving stories from his hardscrabble upbringing with some of the toughest challenges he’s undertaken as an entrepreneur and CEO of Starbucks, aka what he calls the “third place,” a public gathering space outside work and home.

“For me, the idea of a ‘third place’ is not just something that exists between four walls,” he writes. “It is a mind-set. A way to exist in the world. That’s why I set out to build a profitable business that also expressed a core ethos: that people of all kinds can come together and uplift one another.

And Schultz has done his homework on presenting his case. Not only does he have the self-made billionaire story locked down, but he’s also traveled the country to talk to everyday Americans about the biggest obstacles we face.

Think of it as the no-political-stone-unturned book by a man who still believes in the American Dream. 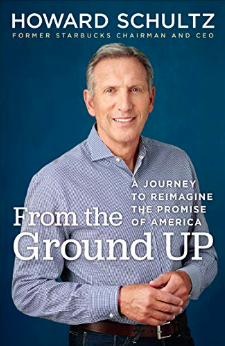 Schultz writes in his acknowledgments that this book “is the most personal book I have yet to write.” And if you don’t know much about Schultz the person, it gives you a detailed look into his past. He grew up in the Canarsie Projects in Brooklyn, N.Y., part of a working-class family strapped for cash. His World War II veteran father was often frustrated and out of work, while his mother dealt with the family stress, her depression taking a toll. At one point, he shares the incredibly sad experience of his father beating him in the shower after he got into an argument with his mom.

It was not a happy childhood, and Schultz was determined to get out and make something of himself.

And so he does. He gets into college, the first to graduate in his family, then goes into sales. But his heart isn’t in it. He begins working for a coffee maker retailer that serves Starbucks, and curious about this little bean roaster in Seattle, he eventually joins their team. On a trip to Italy, he becomes mesmerized by the simple art of serving espresso, an act that encourages community and connection. He is inspired and determined to bring that love of delicious coffee and communal feeling back to the States.

Starbucks the bean roster isn’t interested in serving coffee, so Schultz painstakingly raises the money and launches his own coffee bars named Il Giornale. His startup story is not without its woes. After growing his business a bit, he is presented with an offer to buy Starbucks from his old employers outright, but an investor wants to push him out. Through his connections, he finds himself in none-other than Bill Gates Sr.’s office, a larger-than-life lawyer, who listens to his story and marches over to that powerful investor’s office to thwart that plan, thus saving Schultz’s company and enabling him (Gates also invested) to buy Starbucks.

Over the years, Schultz details many of Starbucks’ major battles, including saving it from the 2008 recession. Unlike many other corporations, the company has also been known to get into political conversations around race, poverty, job creation, among many others. Whether you think that Starbucks belonged in those debates or not, Schultz walks you through each program and political response from the company, explaining his thought process on why they got involved, how they put together campaigns, and the takeaways from each one.

A preview of Schultz’s stump speech

Schultz’s Starbucks experiences then segue into tackling the most pressing political issues we face today: healthcare, affordable tuition and access to college, supporting veterans, job creation, wealth inequality, supporting global partners in China, racism, immigration and refugees, the opioid crisis. It almost reads like a campaign speech on a whistle-stop tour discussing all the issues, and how he feels about each one.

As he dissects each major issue, though, he presents each as a case study of his experiences leading initiatives as Starbucks CEO. He does not go into detailed plans as to how he would handle these issues as president. These stories are precursors, to what we assume, will become his more fully fledged-out platform presented on his site should he choose to run.

In hometown of Seattle, Howard Schultz defends presidential aspirations as protesters sound off

“Corporations must do more for the people they employ and the communities they serve,” he writes. “Funding, owning, or leading a company in America is an extraordinary privilege … But there is no guarantee that this unique aspect of American life will stand the test of time. Our economy cannot sustain itself unless pathways to self-sufficiency, not just great wealth, are open to many more people.”

Schultz’s major wins include providing healthcare benefits for his employees, even part-timers. When the company was hurting, an investor called him urging him to dump the benefits. He refused.

Schultz also realized a major gap in his people realizing their college dreams. Searching for ways to make it affordable and doable, he partnered with Arizona State University to offer an online degree program that reimburses employees 100 percent for tuition, after their scholarships and financial aid pay out.

Starbucks also committed itself to hiring at least 10,000 veterans and military spouses, and helped hold major job fairs across the country as part of a major corporate collective youth hiring initiative.

The biggest misstep he highlights is the controversial race relations campaign Starbucks launched by writing “Race Together” on coffee cups. The gloriously eloquent Gwen Ifill (RIP) tweeted it best: “honest to God, if you start to engage me in a race conversation before I’ve had my morning coffee, it will not end well.”

Additionally, Starbucks came under fire last spring when two black men were arrested in a Philly store. They responded, rightly, by closing all their U.S. stores for mandatory racial-bias training.

Absent from the book are two of the biggest wealth-equality battles in Seattle history. The head tax debate, in which Starbucks joined Amazon as one of the largest area companies to oppose the tax for homeless initiatives. It’s fair to point out that the Starbucks letter came in May, less than a month before Schultz announced he was leaving as CEO. And the $15 minimum wage passing in Seattle, of which he also did not support.

Sorry about the Sonics, Seattle

Oh, and Sonics fans? He’s sorry. He’s really, really sorry for that, too. He wished he’d held out and found a local buyer.

Overall, Schultz’s main message is that he believes in developing people. And he alludes to the fact that it’s these types of smaller, successful, community-minded programs that could spark into larger initiatives should he become president.

Schultz’s aspirations for higher office started way before he left Starbucks though. He reveals the moment in 2011 that likely began his move toward political office. He was healing from a surgery and watching the never-ending news cycle covering our debt crisis, when he thought we were having a “crisis in American leadership.” As a result, he started traveling more, talking to Americans about their issues, and thus the seeds for this presidential run were planted.

Throughout, his tone is humble and grateful, the book is filled with kudos for other talented, driven people he’s worked with and met, and he honestly believes that he has the experience and grit from his background to lead our country. Howard Schultz wants us to believe, as he does, that the American Dream is not dead.

“Every day, human joys, routines, and even traumas take place in our stores,” he writes, giving examples from birthdays to first dates, to the jobless killing time and people shooting up in the bathrooms. “What happens in America happens in Starbucks.”

Whatever you think of Schultz or his ambitions — or whether he should even be in this crucial race against Trump (Howard, please give Mike Bloomberg a call. He probably has some solid advice for you.) — you can’t come away from this book without a greater understanding of the man. Ultimately, he’s presented a compelling, and likable, portrait of himself.