If Armoire has its way, women can say goodbye to cluttered closets and hundreds of wasted hours shopping for clothes.

The Seattle startup is picking up traction with its monthly subscription clothing rental service geared toward professional women. Starting at $149 per month, the 3-year-old company lets customers rent designer clothes and exchange for something new at any time. If they like something enough, members can purchase items at a discounted rate.

At an event this past Thursday at Ada’s Technical Books in Seattle, the company lifted the hood on its tech-fueled recommendation engine that powers Armoire’s user experience.

“We’re not really like a fashion company,” Zach Owen, co-founder of Armoire who leads engineering, told the crowd on Thursday. “We are more like a data company.”

Armoire follows a similar playbook to Rent the Runway, the 10-year-old New York City-based company that was recently valued at nearly $800 million. Its rental business model is built on buying from brands at wholesale prices, constantly shuffling clothes in and out of its dry cleaning warehouse below The Riveter in Capitol Hill. Armoire aims to be cheaper than hiring a wardrobe consultant and more efficient than browsing through racks at various stores.

But what makes the company stand out, according to co-founder and CEO Ambika Singh, is technology.

“[Rent the Runway] has really not taken advantage of the fact that they can service customers better through curation,” she said. “We call it the hunter-gatherer method — women are still tasked with digging through literally the entire Rent the Runway inventory.”

Inside the curation process

At a basic level, Armoire aims to match people with clothes they want to wear — a task that sounds simple, but is actually quite complex due to varying individual preferences for style, fit, and other needs.

Armoire’s recommendation algorithms are based on vectors that represent both customer preferences and item attributes (brand, color, tightness, occasion, etc.). The technology multiplies those vectors to determine strength of correlation between the two datasets, and ultimately to figure out what to show customers in their virtual closet. Owen called it a “big matrix multiplication problem.”

The vectors can be plotted as arrows on an axis. In the example below, since the customer vector is close to the green dress, that would be a good match. 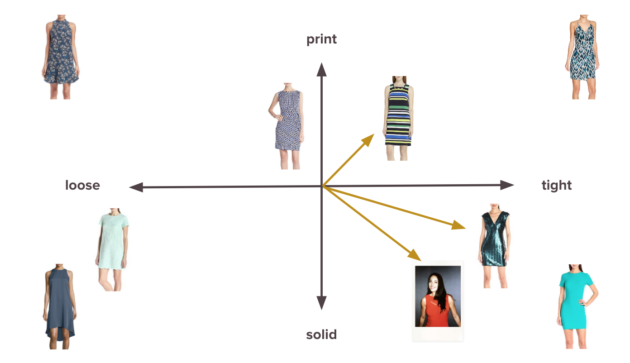 The more data Armoire collects from customer feedback, the better its recommendation algorithms work. It also analyzes information such as the temperature in a given zip code to help drive the curation process.

“There are a lot of holes we need to fill in to truly understand what your style and fit preferences need, and how that translates into a digital product that you can actually interact with,” said Miriam Subbiah, head of product at Armoire.

Yet despite the push for more automation, Armoire also provides in-house stylists that can help when algorithms can’t complete the job.

“There is always a human element to fashion,” Owen said.

From buying to renting

The traditional way women shop for clothing is broken.

That’s been the thesis ever since Singh and Owen first launched Armoire while at MIT’s Delta V accelerator program.

“We’re trying to change the relationship with clothes from owning to renting,” Singh said.

Sustainability, efficiency, and risk are core tenets of Armoire. Singh said that 20 percent of new garments sit in a closet and are never actually worn, instead ending up in a landfill.

“It’s an extraordinary amount of time in terms of the productive hours that could translate to,” Singh said. “We really want to be a one-stop shop for her, and because of the power of curation, we are able to do that.”

The CEO added that women can tend to fall into pattern wearing, or using the same clothes over and over because of wardrobe risk aversion.

“Renting clothes gives you an opportunity to step outside what is standard for you on an individual consumer basis,” Singh said. “That is a really powerful experience.”

“Renting clothes gives you an opportunity to step outside what is standard for you on an individual consumer basis. That is a really powerful experience.”

Armoire has “thousands” of customers, with 40 percent of members living in Seattle, Singh said. The target market is professional women in the 30 to 50 year old range — a group that Singh said “has largely been ignored by the market yet is so important to the economy.”

Amy Nelson, CEO of The Riveter, the Seattle-based women-focused co-working space company where Armoire is based, is a big fan of the service. Nelson said she started using Armoire after welcoming her third daughter, noting it was “perfect for that post-baby period when my size was fluctuating.”

“My time is my scarcest resource and Armoire allows me to change up my wardrobe on the fly — and do away with dry cleaning entirely,” she told GeekWire.

Subbiah, the company’s product leader, noted how Armoire looks at fit “not as size but how people like the garment to actually drape on them.”

“We know that size is constantly in flux,” she explained. “If a service like Armoire can actually understand that and support that instead of inhibiting it — that’s super liberating to me. It’s a much more positive way of thinking about sizing and interacting with clothing, than trying to fit in a numeric standard. It’s not a fashion-first approach but it’s something we can do because of the data.”

Rent the Runway originally started as a rental service for party wear but now earns a bulk of revenue from its Unlimited program, which launched two years ago and, like Armoire, aims “to solve the problem of what to wear to work, for everyone from new hires to C-suite executives,” according to a New York Times story from October.

“Unlimited frees mental space for women to think about more important matters: what to say in that big meeting; how to describe their employment history in a crucial job interview; how to, in the grand scheme of their professional lives, get ahead,” wrote Times reporter Sheila Marikar.

Other startups trying to disrupt how we buy clothes include Stitch Fix, which went public in 2017 and is valued at $2.7 billion. And just down the road from Armoire’s office sits Amazon, a tech giant that recent rolled out a try-before-you-buy service called Prime Wardrobe.

“Our differentiation from Stitch Fix is that we offer variety to our customers through the rental model,” Singh noted. “We’re also high end contemporary from an inventory perspective — average MSRP is $250-plus — and we strive to work with women owned and ethical fashion brands.”

Armoire has raised $4.2 million from investors such as Zulily co-founder Darrell Cavens; Foot Locker exec Vijay Talwar; and a number of female backers who decided to invest after first becoming customers. They include Sheila Gulati of Tola Capital, former Drugstore.com CEO Dawn Lepore, and Angela Taylor of Efeste. The company is currently raising more investment.