Microsoft’s cloud division continues to boost its balance sheet as the tech giant beat expectations for its fiscal first quarter.

Microsoft stock dipped slightly but came back up in after-hours trading. Shares are up about 35 percent this year, currently trading at $136. 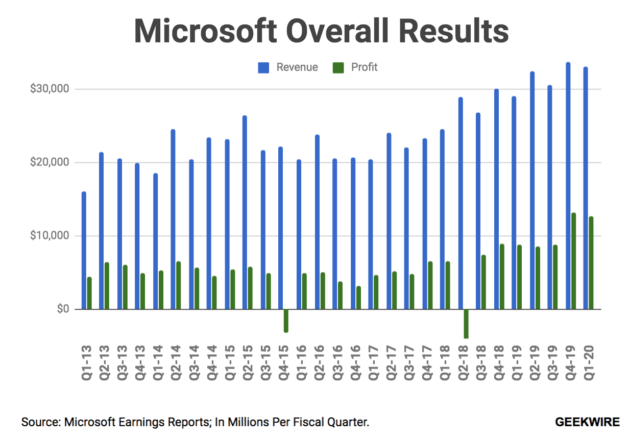 The company’s market cap is sitting at just above $1 trillion; it’s neck-and-neck with Apple for the title of world’s most valuable company.

“The world’s leading companies are choosing our cloud to build their digital capability,” Microsoft CEO Satya Nadella said in a statement. “We are accelerating our innovation across the entire tech stack to deliver new value for customers and investing in large and growing markets with expansive opportunity.”

“It was a strong start to the fiscal year with our commercial cloud generating $11.6 billion in revenue for the quarter, up 36% year over year,” said Amy Hood, executive vice president and chief financial officer of Microsoft.

Microsoft splits the company into three main areas in its earnings reports. Revenue from the company’s Intelligent Cloud division came in at $10.8 billion, up 27 percent, thanks to Azure revenue growth of 59 percent, which was down from the 64 percent growth clip last quarter.

Microsoft signed a flurry of cloud deals in recent months with companies such as AT&T and SAP, which follows similar deals with Sony, Kroger, and others over the past year. It has also swooped up four cloud startups since July, and said LinkedIn would move to Azure. The company is largely seen as the No. 2 player in the cloud computing market, gaining market share on Amazon Web Services in recent years. 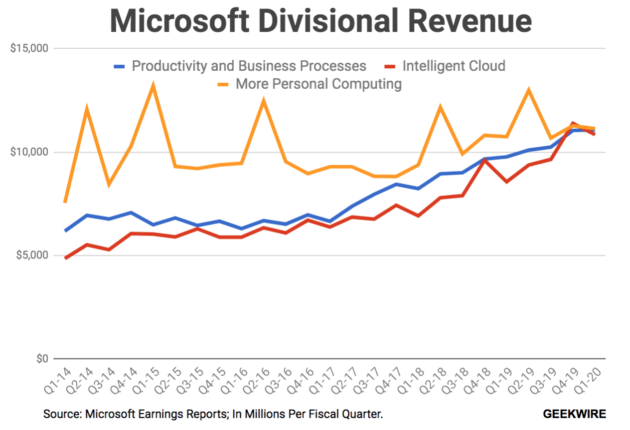 Surface revenue dipped slightly to $1.14 billion, down 4 percent, which was “driven by timing of product lifecycle transitions” as Microsoft prepares to release a new lineup of devices including new Surface laptops and the new Surface Earbuds.

Revenue from LinkedIn grew 25 percent over last year with “record levels of engagement and job postings.” Revenue from Xbox content and services revenue stayed level, but gaming revenue was down 7 percent due to lower console sales. Microsoft recently changed how it reports Xbox revenue; it no longer reveals the number of Xbox Live monthly active users, though it said it saw a “record” number of users in the quarter.

Microsoft will hold its earnings call at 2:30 p.m. PT.