Bill Gates wanted to clear something up.

Speaking at a celebration event for a new University of Washington computer science building named after the Microsoft co-founder and his wife, Gates on Thursday recalled the days when he and Paul Allen would sneak into buildings on the UW campus and tinker around with the university’s computers — a key step in the journey that led them to launch Microsoft years later.

“There is a history of work that Paul and I did here. But we didn’t actually steal or borrow the computers — they were too big,” Gates joked. “We borrowed the computer time.”

Gates offered some rare displays of emotion at the gathering on campus in Seattle where top tech, political, and education leaders convened to officially open The Bill & Melinda Gates Center for Computer Science & Engineering. 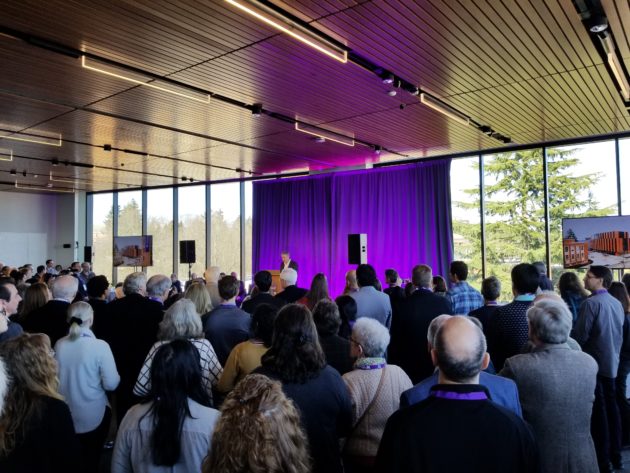 The $110 million, 135,000 square-foot building allows the UW to double enrollment capacity from 300 to 620 students per year for computer science, which has become the top first-choice major for incoming freshmen. GeekWire got a sneak peek inside the building earlier this week — see photos here.

“It’s great to be here. I live right over there,” he said, pointing outside across Lake Washington on a beautiful crisp February afternoon. “I’ve been watching, making sure this thing got built well.”

The view from the roof of the new UW computer science building is pretty epic… pic.twitter.com/r4Kyy5UcRX

The new building was named in honor Bill and Melinda Gates after Microsoft and a group of their longtime friends gave a $30 million donation in their honor. The Gateses made their own separate $15 million contribution via the Bill & Melinda Gates Foundation.

“It means a lot that great friends stepped up to help,” Gates said. “It’s great to celebrate that group which was so key to the success of Microsoft.”

Gates, 63, appeared to choke up when talking about the late Allen, who passed away last year at the age of 65. Allen also gave millions to the university and to the computer science program. In 2003 he donated $14 million to open the original building that bears his name and last year the school was renamed to the “Paul G. Allen School of Computer Science & Engineering” after Allen gave another $40 million to the UW.

“It would have been great if Paul could have been here,” Gates said of his longtime business partner. “He deserves so much credit for what happened at Microsoft and for always believing in innovation and believing in the University of Washington. Hopefully he somewhere can appreciate the great development that is taking place here, somewhat in his honor.”

“It would have been great if Paul could have been here,” Bill Gates said. “He deserves so much credit for what happened at Microsoft and for always believing in innovation and believing in the University of Washington." Video courtesy of @UW https://t.co/mHJDPdLXw2 pic.twitter.com/vje9jNECGN

Gates’ connection to the UW already runs deep. His parents met on campus and have been hugely impactful alumni over the past several decades. His sister, Kristianne Blake, sat on the Board of Regents for several years and was just replaced by Libby MacPhee, Gates’ other sister.

“Everyone in my Dad’s family got a degree here and served as a Regent — I’ve been very careful that I haven’t done either of those things for any university,” Gates joked. “If I ever do — which I won’t — this would be the place to do it.”

Bill Gates patched things up with Paul Allen, hoped to travel the world with Microsoft co-founder

Gates said it’s “amazing” when a local university produces talented graduates who go on to launch companies and then ultimately give back to the institution.

“This state is very lucky that that’s going on here in such a strong way,” he said, adding that “the frontiers of software are as important and exciting as they’ve ever been. That’s what I’ve seen with some of the great students downstairs.”

MISL had a special visitor today! Thanks for stopping by, ⁦@BillGates⁩! It is an honor to have your name in the building! And thanks for the good question about random access to ;). ⁦@datamolecules⁩ @uwcse @microsoft pic.twitter.com/n6Wsdb0Eh2

Cauce, the UW president, described the building as “a vehicle for increasing opportunity for Washington students.” Inslee, who is reportedly set to announce a 2020 president run this week, said “this is so much beyond the world of computing.”

“The world of computing feeds every single thing that we are growing our economy and society on now,” Inslee said.

Microsoft, Amazon, Google, Zillow, and Madrona Venture Group also contributed to the construction costs, in addition to funds from the university and state. More than half — $70 million — of the funding for the building came from more than 500 private donors, 200 of which are not alumni of the UW. The state provided $32.5 million and the UW put $9 million toward the building.

Smith, the Microsoft president who helped lead fundraising efforts, called it a “wonderful journey” that brought together not only friends of the university but also tech giant rivals who are investing in the program’s future.

“Even more than the building itself, what’s really important is what goes on inside: the teaching, the research, the learning,” Smith said.

Since Allen helped open the original UW CSE building, demand for computer science graduates has skyrocketed in the Seattle region, thanks to a strong startup ecosystem, Amazon’s rapid growth, and the opening of Seattle-area engineering offices by Google, Facebook, and many other tech companies based outside the region. About 90 percent of UW CSE graduates remain in-state after completing their degree.