Bill Gates is helping to expand access to computer science at the same university where he and Microsoft co-founder Paul Allen snuck into buildings as teenagers to program computers — ensuring that future generations won’t need to go to such lengths to get started in the field.

Bill and Melinda Gates joined hundreds of supporters from Seattle and the University of Washington at the Paul G. Allen School for Computer Science & Engineering on Wednesday to celebrate the end of the first phase of construction for the new Bill & Melinda Gates Center for Computer Science & Engineering. The facility will open in January 2019 and double the size of the UW’s nationally-ranked computer science program.

Both Bill and Melinda Gates spoke on Wednesday, making it clear that having their name on the new building means a great deal to them. Their connection to the UW already runs deep. Bill’s parents met on campus and have been hugely impactful alumni over the past several decades. His sister, Kristianne Blake, sits on the Board of Regents. But his role in the computer science program’s expansion is especially notable given the history.

“My connection is a little more unusual, which is that Paul and I stole lots of computer time,” Bill Gates half-joked on Wednesday, referencing how he and Allen would sneak onto campus as teenagers to program computers, a key step in the journey that led them to launch Microsoft years later.

The new building was named after Bill & Melinda Gates earlier this year, when Microsoft and a group of their longtime friends announced a $30 million donation in their honor. The event Wednesday night also honored the Gateses for a separate $15 million contribution, via the Bill & Melinda Gates Foundation, that helped officially complete a $110 million fundraising campaign for the new building.

After Gates and Allen founded Microsoft and moved the company back to Seattle in 1979, they wanted to have a university in their backyard that was also growing.

Gates added that “if there’s ever been a clear win-win for this region, for Microsoft, for companies here, and for the students, it has to be investing in great computer science.”

After speaking, Gates tried to leave but was stopped by a throng of young computer science students who peppered the billionaire with questions and selfie requests.

Gates isn’t one to overuse superlatives. So when he came home from work a few months ago and told his wife that something “incredible” happened, she was surprised.

He revealed the exciting news: A group of friends had come together to donate $30 million for the new computer science building and wanted to name it in honor of Bill and Melinda Gates.

“That was a really, really special day for us,” Melinda Gates said today. “We really appreciated that.”

The Gates Foundation wasn’t actually aware of the naming decision when it told the UW previously that it would contribute to the new building to finish the fundraising effort.

But it’s almost fitting with how it all played out: the Gates couple helping invest in the future of computer science education for students in their home state at a university they care about so passionately, while their friends quietly did the same in part to honor the Gateses for the impact they’ve had in the community.

“They had no idea we were going to name it after them,” said Microsoft President Brad Smith, who was instrumental in fundraising efforts for the expansion. “We said, we’ll take their money, but they can’t change the name.”

Those who contributed to the $30 million gift in Bill and Melinda’s name told GeekWire that they did so for two primary reasons: to salute the Gates family, and to provide capacity for future generations learn computer science.

“They’ve done a lot for the region and many of us, so I was particularly drawn to the idea that not only could we help the university and get more computer science done, but that we’d recognize Bill and Melinda in the process,” said Mundie, the former chief research and strategy officer at Microsoft who was also a senior advisor to Gates.

Raikes, who spent 27 years at Microsoft before becoming CEO of the Gates Foundation in 2008, told GeekWire that he and his wife Tricia donated to the new building to pay it forward and make “an investment in the future” for the university, the Seattle area, and the state.

“What you’re seeing here is a great deal of gratitude for what the University of Washington does for the state and beyond, but also, how we at Microsoft were shaped by Bill and Melinda and their leadership,” Raikes said. “You’re seeing gratitude for both elements of that.”

Bill and Melinda Gates have contributed to the university in a variety of ways, helping fund everything from other new buildings to scholarships for students. Earlier this year, the Gates Foundation announced a $279 million research grant to the UW, which marked the largest private donation in the university’s history.

While their most recent monetary donation might pale in comparison to the research grant, it will certainly have a big impact on students. The new 135,000 square-foot building will include 16 labs, a lecture hall, two 100-person classrooms, a 250-person auditorium, three seminar rooms, an event space, communal and study spaces, office and support spaces. It will help the UW meet growing demand for computer science; it currently has to turn away two out of every three qualified student applicants in the department.

Ed Lazowska, professor of computer science at the UW, said on stage that “this project is a dream come true for us.” Smith told GeekWire afterward that “what was a dream is now well on its way to reality.”

“This building is really fundamentally about a lot more than bricks and mortar,” said the Microsoft president. “It’s about creating more opportunity for more of the kids who grow up in Washington to get a degree that will lead them to really exciting futures in this state.” 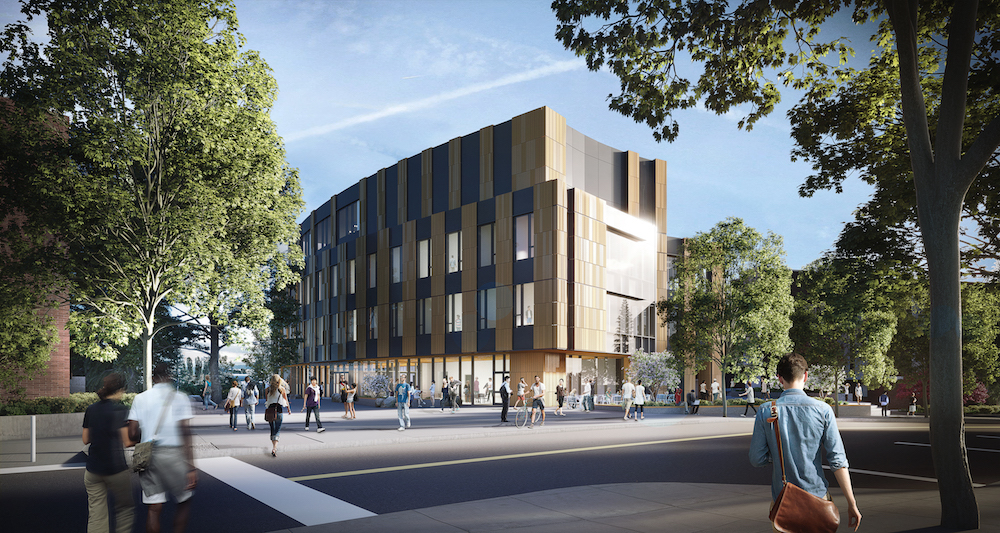 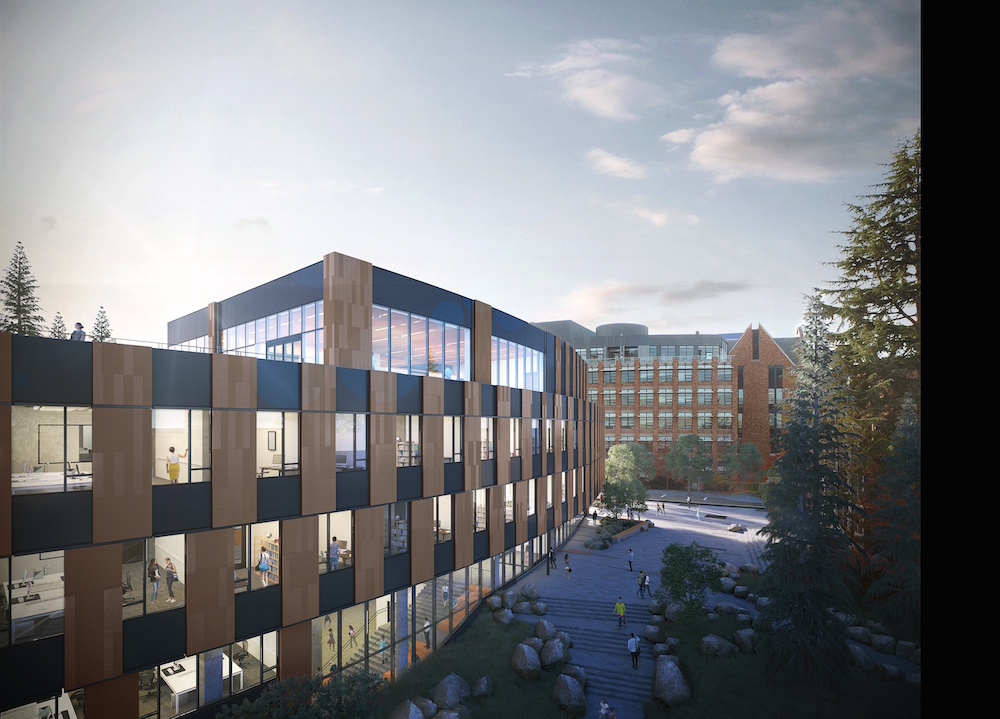 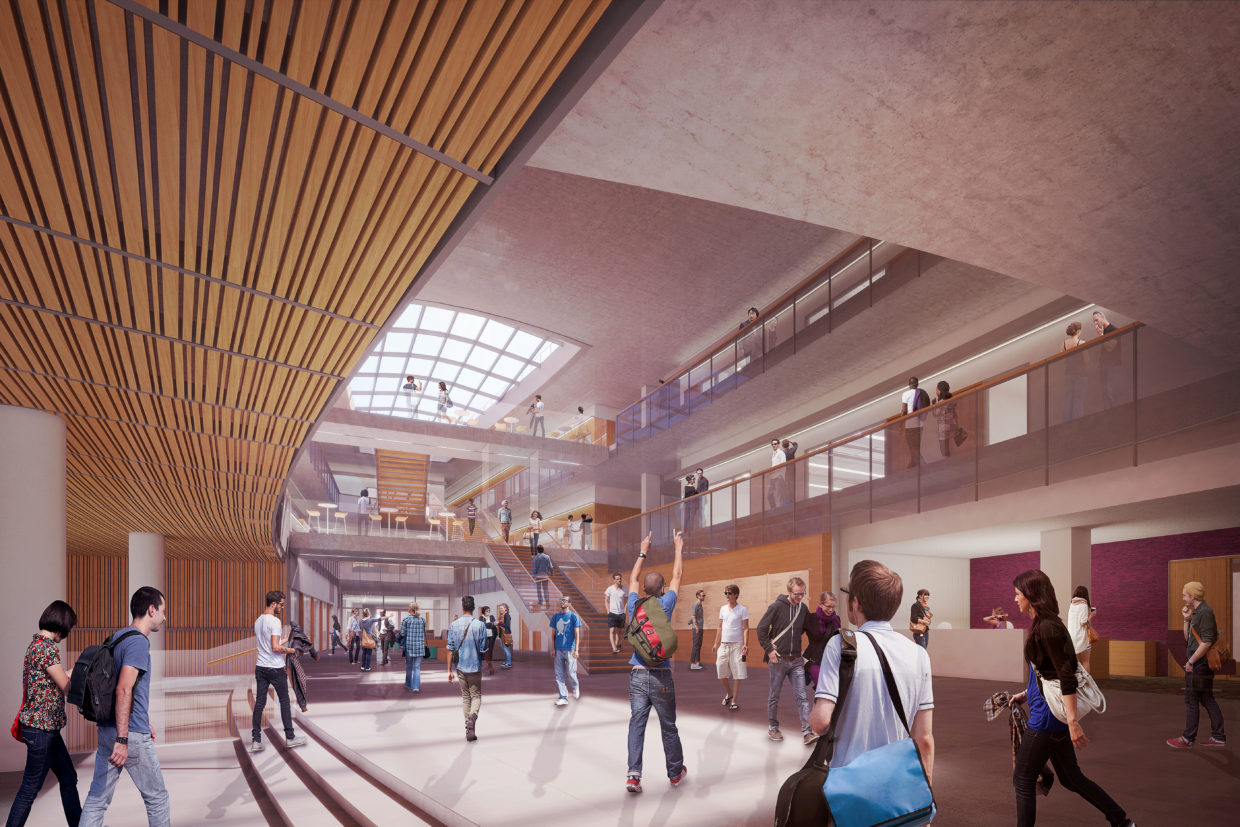 Microsoft, Amazon, Google, and Zillow also contributed to the construction costs, in addition to funds from the university and state. More than half — $70 million — of the funding for the new computer science building came from private donors. The state provided $32.5 million and the UW put $9 million toward the building.

Smith noted that “it’s a new building for the future of Washington.”

“It’s a day where I hope the people in Olympia are paying attention,” he said. “We’ll need ongoing support from the state and the legislature to make sure there’s funding so we fill that building with all the students that deserve to be inside of it.”

Smith added that it’s important to have Bill and Melinda Gates’ name on the building given their work to champion diversity in technology industry. It’s something Melinda Gates noted in her remarks.

“Sometimes, when you agree to a building, you have to push people in a certain direction a little bit,” she said. “This is a case where, because of the work that Ed Lazowska and [Allen School Director Hank Levy] have done to make sure there are multiple and many pathways for young women and minorities into computer science, we don’t have to do anything except be along for the ride.”

UW President Ana Mari Cauce called Wednesday’s celebration a pivotal moment for computer science education for the university and the state because of the opportunities it will provide students, who are “the heart and soul of our mission.”

Cauce later told GeekWire that she’s also excited for the expansion because of how she’s seen computer science have a positive impact on the world.

“Sometimes people tend to talk about computer science in general as a way of doing well, or in other words making money — and there’s nothing wrong with that,” she said. “But it’s also an incredible force for good. When I see the kind of work that students at the Allen School are doing, they really are making the world a better place and that’s what it’s all about.”

The new building will sit directly across the street from the Paul G. Allen Center for Computer Science & Engineering, which opened in 2003 thanks in part to a $14 million donation from Allen himself, who co-founded Microsoft with Gates in 1975.

The UW’s computer science school was renamed the “Paul G. Allen School of Computer Science & Engineering” earlier this year after Allen donated another $40 million to the UW.

In the decade since Allen helped open the current UW CSE building, the demand for computer science graduates has skyrocketed in the Seattle region, thanks to a strong startup ecosystem, Amazon’s rapid growth, and the opening of Seattle-area engineering offices by Google, Facebook, and many other tech companies based outside the region. More than two-thirds of UW CSE graduates remain in-state after completing their degree.