Microsoft co-founder Paul Allen will make a $40 million gift to the University of Washington’s computer science and engineering program — a historic act of philanthropy that university officials say will put the UW and Seattle region at the forefront of the technology revolution for decades to come.

Allen’s gift, combined with an additional $10 million from Microsoft in Allen’s honor, will create a $50 million endowment for a new Paul G. Allen School of Computer Science & Engineering at the UW in Seattle. The elevation from a department to a full school is an important distinction and recognizes the success and stature of the UW’s growing computer science program.

“We are entering a new golden age of innovation in computer science, and UW students and faculty will be at its leading edge,” Allen said in a statement. “My hope is that the school will have the same influence on them as it did on me — that they will continue to dream big, breaking through technological barriers and using their skills to solve some of the biggest problems our world faces.”

The UW Board of Regents voted moments ago to approve the new school. GeekWire was at the meeting on Thursday at the UW’s Bothell campus and spoke with UW President Ana Mari Cauce. She called Allen a “renaissance man” who the university is humbled to be associated with and said the endowment will be valuable for one of the UW’s top programs.

“We already have a fabulous computer science program,” she told GeekWire. “This will take an already-excellent department and take it out in the stratosphere.”

Allen will speak at an event at the UW’s main Seattle campus this afternoon celebrating UW CSE’s 50th anniversary — stay tuned to GeekWire for our reporting from there.

Update: See Allen’s comments from the event below.

“When Paul Allen and Bill Gates founded Microsoft in 1975 with a vision of a computer on every desk and in every home, they ignited what would become the modern-day software industry,” Microsoft President Brad Smith said in a statement. “While much has changed in the past 40 years, one ideal endures: computer science education is a gateway to progress, innovation and opportunity. We are delighted to honor Paul’s tremendous impact on our company, and his continuing support for computer science will have a lasting impact on generations to come.”

Once fully funded, the endowment will provide roughly $2 million per year of “seed funding” for new initiatives in computer science and engineering “that enable us to envision and create the future,” said Ed Lazowska, Bill & Melinda Gates chair in the UW CSE department.

“Mr. Allen’s intention is to allow the school to be agile in meeting special opportunities that arise, helping CSE to thrive and to advance its educational and research missions,” Lazowska said. “That is, the gift is meant to give CSE flexibility in responding to short-term needs or taking advantage of fortuitous circumstances that can be highly leveraged with discretionary funds.”

Lazowska added: “Across the country, computer science programs are expanding, diversifying, and increasing in prominence – nowhere more so than at the University of Washington. Transitioning to a School of Computer Science & Engineering reflects the central role that CSE plays, as well as the broad interdisciplinary connections that CSE has established, across the entire campus.” 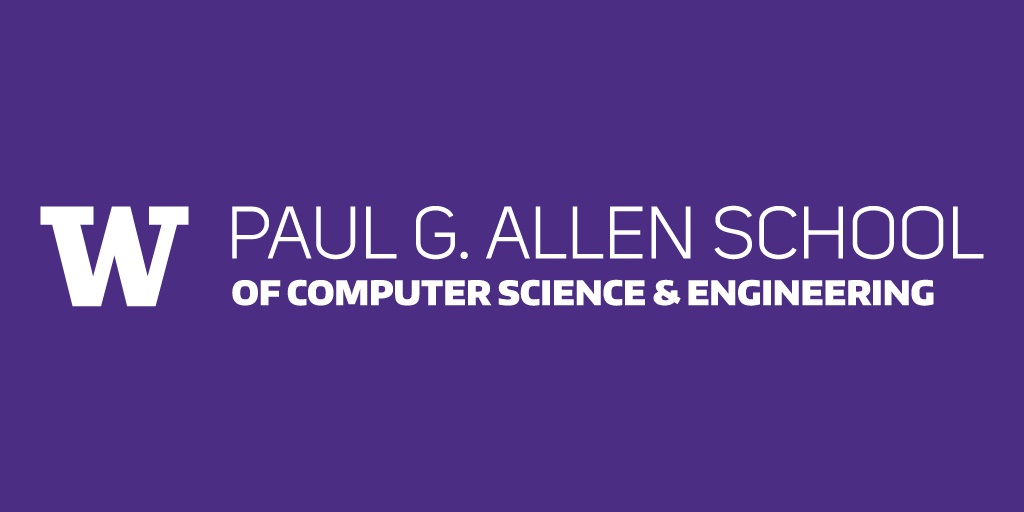 Examples of how Allen’s gift will be used include new research initiatives; equipment purchases; recruiting purposes; professorships; scholarships for students; and more.

“They have a wonderful opportunity to put their skills and expertise to use solving the world’s biggest problems,” Allen wrote. “The amount of computing power available for their projects and the facility of the programming tools they can use far exceed anything we had.”

Lazowska noted that the endowment income “is intended to be complementary to, but not to replace, existing funding sources.”

The $50 million endowment will not go toward the construction of the UW’s new 135,000 square-foot CSE building, which will open in January 2019 and is funded in part by companies like Microsoft, Amazon, Google, and Zillow. The building will double the capacity of the university’s CSE program and allow the school to award more than 600 degrees annually.

Allen previously donated $14 million to help build the 85,000 square-foot Paul G. Allen Center for Computer Science & Engineering, which opened in 2003 and laid the groundwork for what has become one of the nation’s top computer science programs.

In the decade since Allen helped open the current UW CSE building, the demand for computer science graduates has skyrocketed in the Seattle region, thanks to a strong startup ecosystem, Amazon’s rapid growth, and the opening of Seattle-area engineering offices by Google, Facebook, and many other tech companies based outside the region. More than two-thirds of UW CSE graduates remain in-state after completing their degree.

In 2016, CSE became the leading “first-choice” major among confirmed incoming UW freshmen, surpassing the longtime leading preferred major, Business Administration. UW says it currently has to turn away two out of every three qualified student applicants in the CSE department. Last year, 391 students graduated from the department and 5,000 students took CSE introductory courses.

“This is a degree that students want,” Cauce told GeekWire. “The endowment is perfectly timed.”

Early days at the University of Washington

Though he never attended the UW — he dropped out of Washington State University after two years to work at Honeywell — Allen’s ties to the university go back to his days as a high school student in the Seattle area, where he and fellow Lakeside School classmate Bill Gates would “tinker around” with the university’s computers. They used devices like a CDC 6400 and a Burroughs 5500 to develop scheduling software for Lakeside; the young geeks also played with ARDS and IMLAC computers, which was their first exposure to the graphics and mouse interface.

In his LinkedIn post, Allen called the UW a “special place.” Allen described how he and Gates spent time on campus building software for the “Traf-O-Data machine,” which automated a traffic-measuring process.

“But while Traf-O-Data was technically a business failure, the understanding of microprocessors we absorbed was crucial to our future success,” he wrote. “And the emulator I wrote to program it gave us a huge head start over anyone else writing code at the time. If it hadn’t been for our Traf-O-Data venture, and if it hadn’t been for all that time spent on UW computers, you could argue that Microsoft might not have happened.”

Their experience on the UW campus ultimately helped inspire the pair to launch Microsoft in 1975 and change the personal computing world forever.

In Allen’s memoir, Idea Man, he described how he spent nearly every summer day after his sophomore year in high school on the UW campus at a computer terminal in the electrical engineering building and “read manuals over hamburgers at the student union.” In his senior year, he “brazenly walked through a door and into UW’s computer science lab,” where he programmed on a Teletype linked to a Xerox Data Systems Sigma-5.

That’s when an assistant professor realized Allen wasn’t a UW student after word got around that “I seemed to know what I was doing,” as Allen recalled in his book.

“All right, I’ll tell you what,” the professor said. “If you keep helping my students, you can stick around.”

In 1989, Allen’s contributions helped to build the Allen Library on campus, which is named after his father, the late Kenneth S. Allen, who was the UW’s associate director of libraries from 1960 to 1982. Allen’s mom, the late Faye G. Allen, taught at the Ravenna School in Seattle.

On #InternationalWomensDay, thinking of my mother whose powerful lessons continue to inspire me. pic.twitter.com/9u7yOuiywT

He has also reshaped his hometown with projects including Museum of Pop Culture, formerly EMP, and Vulcan’s numerous real estate developments in the South Lake Union neighborhood, including the construction of the campus that became Amazon’s headquarters.

Allen was also recently recognized as one of America’s top philanthropists; his contributions range from committing $100 million to fight Ebola to the various non-profits that the Paul G. Allen Foundation helps support. In addition to his donations to the UW, he has also given money to Washington State University. His philanthropic contributions exceed $2 billion to date.

Allen’s other passions — which drive much of his decisions for where to spread his fortune — include aerospace and music (he can play a wicked guitar solo). The Seattle native a big sports fan, too. He and his father would attend UW football games in the early 1960s. Today Allen owns the Portland Trail Blazers, the Seattle Seahawks, and part of the Seattle Sounders.

Allen’s net worth is now $19.9 billion; he ranks 21st on Forbes’ list of richest people in America.

“I look forward to watching the new Paul G. Allen School of Computer Science and Engineering continue to make profound contributions both to the field and to the world,” Allen wrote on LinkedIn. “I look ahead with anticipation to the advances that will continue to flow from the school — advances that I hope will drive technology forward and change the world for the better.”

We’ll update this post with more details from Allen’s speech at the UW later today.

Update: Allen’s address at the UW

Speaking to a packed and excited gathering of local tech leaders, UW professors, and computer science students who lined the balconies inside the building he helped build more than a decade ago, Allen thanked UW officials and Microsoft. He looked out at the room and said “it’s my kind of crowd.”

“I feel right at home with you who appreciate the same kind of challenges that attract me,” he said.

Allen mostly read from his LinkedIn post that published on Thursday, which recounted stories from his days on campus as a high school student. Allen referenced the Traf-O-Data machine and gave a shoutout to former UW student Paul Gilbert, who built the device and was there on Thursday watching his fellow geek speak.

At @uwcse, @microsoft co-founder @PaulGAllen speaks with original Traf-O-Data computer by his side, memento of his early days w/ @BillGates. pic.twitter.com/1WmxSiuVCh

Donning a black suit with a blue shirt and purple tie, Allen repeated his belief that we are entering a golden age of computing. He offered some encouragement to the students, too.

“If you’re ever accused of being overly invested in your ideas, it may very well be a sign that you’re on the right track,” Allen said. 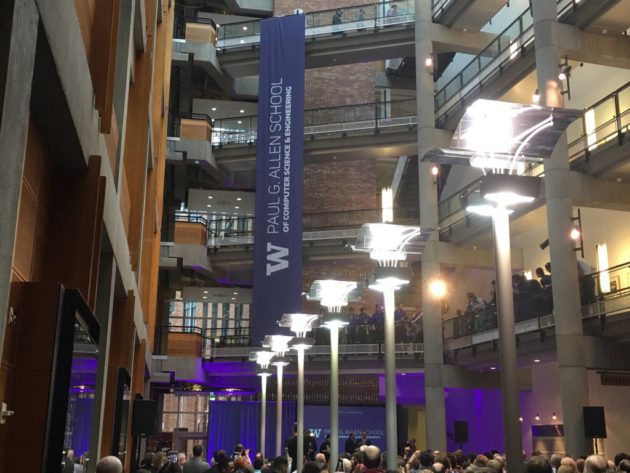 Hank Levy, Wissner-Slivka Chair in Computer Science & Engineering and director of the new school, also spoke and said it was the biggest crowd he’s seen in the building, where the UW Marching Band and UW mascot Dubs were also in attendance. Cauce, UW’s president, and Smith, Microsoft’s president, also shared a few words, as did Lazowska.

“I’ve been a faculty member here for 40 years,” Lazowska said, choking up. “This is my happiest and proudest moment. Through the generosity of Paul Allen and Microsoft, and the generosity and hard work of so many of you, we are positioned for an absolutely amazing future.”

Allen then joined Lazowska, Smith, Cauce, and UW Board of Regents Chair Pat Shanahan on stage to sign the documents that officially name the school in his honor. After he and Lazowska passed a t-shirt cannon to each other, he went back to the microphone once more.

“Thank you again, everybody,” Allen said. “This is a tremendous honor for me.”