The Redmond-based company is announcing a $10 million gift to help the UW’s overcrowded Computer Science & Engineering department construct a second building on campus.

Brad Smith, Microsoft’s general counsel and executive vice president of legal and corporate affairs, called the UW’s computer science department “one of the crown jewels of our local economy” and an “incredible asset for this region and state.”

In an interview with GeekWire, Smith said it’s important to provide UW students with the opportunity to learn computer science and ultimately help increase the local talent pool.

“The growth of the University of Washington is important for Microsoft and every single tech company in this state,” he said. “That’s a big part of the reason why we are investing in this.”

“The partnership between UW and Microsoft goes back more than 40 years — to the pre-Microsoft days when Bill Gates and Paul Allen were high school students at Lakeside and roamed UW’s computing facilities,” said Ed Lazowska, the department’s Bill & Melinda Gates Chair. “We can’t thank them enough for once again leading the way.”

With the gift from Microsoft, the campaign to raise necessary funds is now public, Lazowska said. He cited the increasing interest for computer science degrees — there were more than 1,000 people enrolled in the intro to computer science class this spring quarter — and noted that the program can only accommodate one out of three qualified students who apply to the major.

In the decade since the current UW CSE building opened, the demand for computer science graduates has skyrocketed in the Seattle region, thanks to a strong startup ecosystem, Amazon’s rapid growth, and the opening of Seattle-area engineering offices by Google, Facebook, and many other tech companies based outside the region. 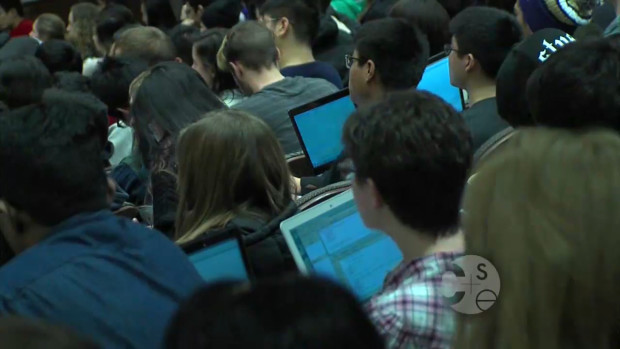 “UW CSE desperately needs to expand,” Lazowska said. “Student demand and employer demand both are extraordinary. Kids who grow up in the state of Washington deserve the opportunity to be educated for jobs at the forefront of our region’s innovation economy. That’s what we do in UW CSE.”

The program expects to hand out 364 degrees this year, up from 317 last year. Lazowska said he wants to see that number get to 600 “as rapidly as possible” and also dramatically increase the availability of upper-division courses to non-majors — but that can’t happen without a new space and more legislative support for growth. He hopes construction on the new building can be completed by fall of 2018.

The new 130,000 square-foot building will be paid for by both public and private money, similar to how the 160,000 square-foot Paul G. Allen Center was funded. The UW is asking the state for $40 million and several major individual gifts have already come through. Washington Gov. Jay Inslee set aside $40 million in state funding for the project in his proposed budget for 2015-to-2017.

“The goal should be to build this building as quickly as we can,” Smith said. “What’s at stake is whether high school students in Washington state have the opportunity to earn this degree the way they should.”

In January, the UW Board of Regents approved funding to hire Seattle-based LMN Architects and begin developing a plan for the school’s second CSE building. The school is looking at several potential building sites around campus, including one that raised concerns from those who don’t want to see a historic landmark demolished.

Lazowska said the Seattle’s tech community has been “extraordinarily generous” with their support of UW computer science and hopes that other companies and individuals will follow Microsoft’s lead.

“Companies, big and small, need more computer science graduates and this gift is an incredibly important first step to expanding the education opportunities in our state,” he said. “UW CSE plays a very important part of this region’s technology ecosystem. Madrona has funded 15 companies that came out of UW CSE and we expect to invest in many more in the future.”