The e-commerce giant spent $9 billion on shipping in the fourth quarter, according to its latest quarterly results. That’s $1.7 billion more than the 2017 holiday quarter, a 23 percent increase. 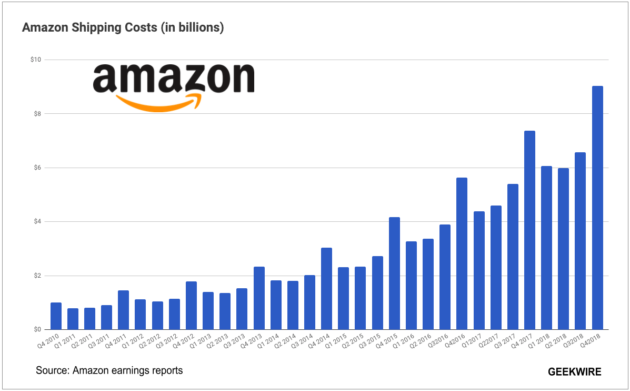 For the full year, Amazon spent $27.7 billion on shipping, an increase of $6 billion or roughly 27.6 percent over the prior year, according to GeekWire research. To put that in perspective, Amazon spent more on shipping alone this year than Starbucks, another Seattle mainstay, reported in revenue for all of 2018.

Amazon’s rising shipping costs reflect its push to get products to customers at a faster and faster clip, along with the increasing popularity of Amazon Prime and its core benefit of free two-day shipping. Last April, Amazon disclosed that it had 100 million Prime subscribers worldwide, revealing its membership base for the first time.

The speedy Prime Now delivery service is live in more than 10,000 cities, Amazon said in its earnings report, and it now serves the majority of Prime members. Amazon has been expanding grocery delivery from Whole Foods stores, and the service is now active in more than 60 U.S. cities.

With all these new and expanding initiatives — in addition to its bread and butter e-commerce shipments — it’s easy to see why costs are rising so quickly.

In an attempt to partially offset these rising costs, Amazon bumped up the cost of a Prime membership last year for the first time since 2014.

Amazon’s relationship with the United States Postal Service for deliveries that has come under political scrutiny, and it is looking to take control of more of the process. Last year it unveiled a new program to help people start their own delivery businesses. And this holiday season it hired a fleet of seasonal drivers to help deliver packages.

The rising shipping costs demonstrate the larger shift toward online shopping. Shoppers surveyed by Deloitte said they planned to spend 57 percent of their 2018 holiday budget online versus only 36 at physical stores. The company’s traditional retail rivals, including Walmart, Best Buy and Target, are spending big on their own e-commerce and shipping initiatives in an effort to keep up with the e-commerce juggernaut.

But Amazon has an advantage over those competitors, in that it can leverage growing profits from its Amazon Web Services cloud computing division to allow its e-commerce operations to run on thin profit margins. Amazon as a whole posted operating profits of $3.8 billion in the fourth quarter, and Amazon Web Services was responsible for $2.1 billion of those profits, or roughly 55 percent.

Amazon stock is down 4 percent in morning trading Friday, primarily thanks to lower than expected projections for its first quarter financial results and potential issues with regulations in India.