Amazon is expanding further into package delivery and promising to support a new wave of small business owners with the launch of a program that helps entrepreneurs start and run their own companies — delivering items purchased on Amazon.com in distinctive blue Prime-branded shirts and vans.

It’s “the next big building block of our end-to-end supply chain,” said Dave Clark, the Amazon executive who oversees the worldwide delivery logistics infrastructure for the e-commerce giant, in an interview with GeekWire, after a preview of the service for reporters in Seattle on Wednesday.

Amazon is announcing the new “Delivery Service Partners” program tonight. It’s the company’s latest move to build its own alternative to (if not yet a replacement for) UPS, FedEx, the U.S. Postal Service and other traditional shipping companies and postal services.

From Prime-branded planes to smiling blue delivery trucks, the Seattle tech giant is increasingly handling the shipping and delivery of items purchased on its site.

The announcement comes a few months after Amazon’s economic impact on the USPS was publicly questioned by President Donald Trump in a series of widely discussed tweets.

The new program lets anyone run their own package delivery fleet of up to 40 vehicles with up to 100 employees. Amazon works with the entrepreneurs — referred to as “Delivery Service Partners” — and pays them to deliver packages while providing discounts on vehicles, uniforms, fuel, insurance, and more. They operate their own businesses and hire their own employees, though Amazon requires them to offer healthcare, paid time off, and competitive wages. Amazon said entrepreneurs can get started with as low as $10,000 and earn up to $300,000 annually in profit.

Amazon is increasingly relying on its own logistics infrastructure as shipping costs continue to spike with growing demand, particularly from Prime members who pay $119 per year for free 2-day shipping and access to Amazon’s 2-hour Prime Now delivery service. It now has 7,000 truck trailers and 40 jumbo jets that shuttle packages to and from 125 fulfillment centers across the world.

In the past, Amazon relied on third-party providers for costly “last mile” deliveries — those from the warehouse to the customer. But now it is experimenting with new delivery methods. In 2015, the company launched a program called Amazon Flex, the company’s Uber-like platform that lets everyday people packages with their own cars. One year later it started experimenting with its own delivery operation. Amazon also last year reportedly tested a service called “Seller Flex” in the U.S. that consists of the company picking up packages sold on its site directly from third-party warehouses.

Clark, a 19-year Amazon veteran who oversees worldwide delivery logistics infrastructure, said the new “Delivery Service Partners” program is not so much an evolution of Amazon Flex — which will continue to exist — but more of an addition to the company’s overall delivery network.

Asked about potential impact on Amazon’s deals with third party carriers, in particular giants like UPS and FedEx, Clark said the company has “great relationships with our partners today and I don’t see any reason for that to change as we go out in the future.”

He added: “You will see the amount of Amazon delivery vehicles on the street grow in the years to come. There will be a diverse mix of providers for the foreseeable future.”

The program is also a new way for the company to expand its reach without directly employing drivers. Amazon’s direct employee base has skyrocketed to more than 550,000 people worldwide.

In addition, the service could be used to power medication deliveries, given Amazon’s announcement Thursday to acquire PillPack.

The tech giant unveiled the program in a unique way. It invited reporters from across the country to Seattle and met them at the company’s headquarters in South Lake Union before shuttling everyone to a fancy historical venue overlooking the city’s skyline.

Many expected Amazon to announce a drone program or water-related initiative, given the hyped up event and picturesque setting. But the company instead drove a Prime-branded delivery van onto the lawn that served as a makeshift press conference area.

In his remarks to the crowd, Clark likened the program to the company’s marketplace platform which lets third-party sellers run their own storefronts that are supported by Amazon. More than half of products sold on Amazon.com now come from third-party sellers.

Clark pitched it as a way for entrepreneurs to operate their own delivery business without worrying about sales activity.

“They get an opportunity with our demand to have a good consistent volume and to grow with Amazon as we grow,” he said.

Olaoluwa Abimbola, one of Amazon’s beta participants for the new program, also spoke at Wednesday’s event. Abimbola started as a Flex driver but is now running his own delivery operation.

“This means the world to me,” he said. “This opportunity provides a future for my family, for my daughters.”

As part of the new program launch, Amazon is committing $1 million to military veterans, offering $10,000 reimbursements for qualified candidates.

And as for the cost-effective drones that reporters expected on Wednesday — that’s still on the roadmap. 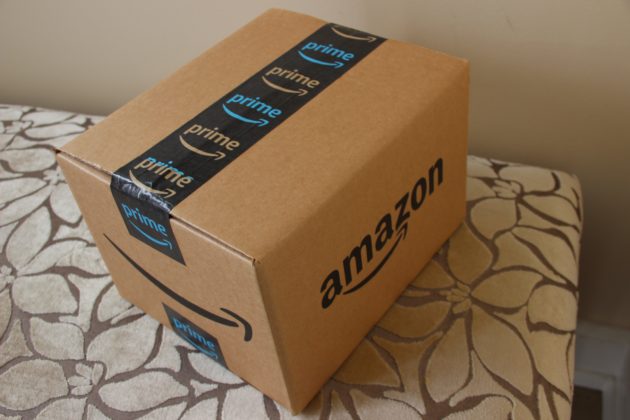 As Amazon invests more into its delivery infrastructure, the company’s traditional retail rivals, including Walmart, Best Buy and Target, are also spending big on their own e-commerce and shipping initiatives. UPS, meanwhile, also continues to invest in its own delivery network.

Amazon has an advantage over competitors, in that it can leverage growing profits from its Amazon Web Services cloud computing division to allow its e-commerce operations to run on razor-thin profits margins, and even at a loss.

Amazon’s shipping costs ballooned to $21.7 billion in 2017, up from $16.2 billion in 2016 and $11.5 billion in 2015. In its annual 10-K SEC filing published this past February, the company said it expects the cost of shipping to continue increasing. Amazon changed its Prime annual membership rate from $99 to $119 this year.

“We seek to mitigate costs of shipping over time in part through achieving higher sales volumes, optimizing our fulfillment network, negotiating better terms with our suppliers, and achieving better operating efficiencies,” Amazon said in the 10K filing. “We believe that offering low prices to our customers is fundamental to our future success, and one way we offer lower prices is through shipping offers.”